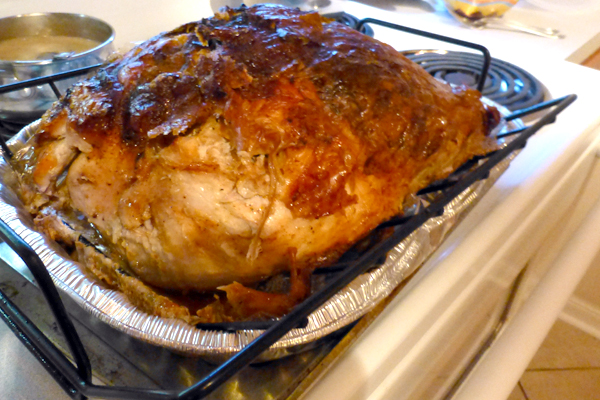 Last month I convinced my family to let me cook a Turducken for Thanksgiving. I gave all of you a heads up it was happening, and talked a lot of friends of mine in to the concept of this being a good idea, then I never reported back. This is me letting you know how it went.

My family loved the Turducken. I really enjoyed the flavor, and I think that the choice of an traditional version with the sausage stuffing was a good one. The stuffing was phenomenal.

As it turns out, 16 pounds of “boneless turkey stuffed with boneless duck stuffed with boneless chicken” is a lot of food. But, amazingly, we didn’t have as much left over as we normally do after Thanksgiving. I think that part of that was that it was easier to pack, and a lot more interesting as a “must have” leftover.

And it also turns out that I’m not good at following instructions. Things I learned for next time:

Otherwise, this was a perfect choice. All I had to do was buy it, thaw it, and put in the oven for the correct amount of time (and at the correct temperature). The Turducken was already seasoned, stuffed and ready. That’s my kind of turkey!