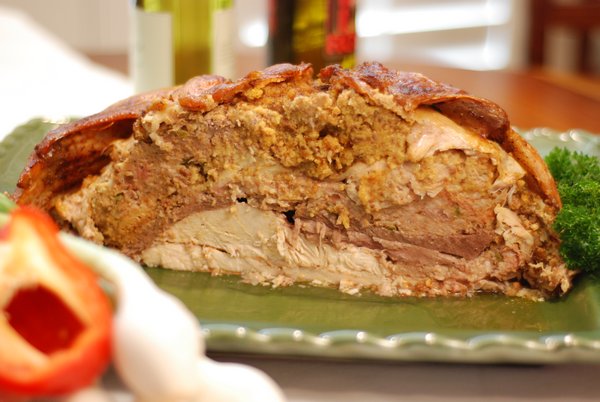 The first time I heard the word “Turducken” was after I’d lived in Houston for a few years. A coworker was explaining that she was preparing one for Thanksgiving because her husband was from Louisiana and that’s what they had every year. Once she explained what it was, I couldn’t quite get it out of my head. It’s a roast dish consisting of a boned chicken inside a boned duck, which is then placed inside a partially boned turkey. So, basically, it’s a turkey stuffed with a duck stuffed with a chicken. And, apparently, each layer of meat has a layer of stuffing between it. How had I never heard of this before? So I went in search of more information. The dish is a considered to be a Cajun invention, though there seems to be some confusion about when and who actually invented it. It used to be difficult to obtain the “bird” outside of Louisiana, but that’s changed as the popularity of it has increased through the recent years. (Wikipedia credits football commentator John Madden with the popularity of the dish.) You can now find Turduckens in your grocery store (in Houston) or through mail order from several vendors. (More about this below.)

Here’s a video I found from the Houston Chronicle about the process of creating a Turducken.

Having trouble viewing the video? Check out the original on YouTube.

Despite my fascination with the dish, I’ve never actually tasted it. Every year I ask my family to consider having a Turducken instead of a traditional turkey. And every year I receive a chorus of “no.” And another year passes.

This year was different.

So, this year, for the first time, I am cooking the main dish. And… drumroll please… I got everyone to agree to a Turducken. Now all I have to do is find one, then cook it. Where to find a Turducken in Houston

Every person I asked for a “where do you get one?” recommendation sent me to Hebert’s, so that’s where I ended up. At Hebert’s Specialty Meats, you can walk in and buy one for the price of $69 (for the Large, 16lbs.). There’s a variety of stuffing choices, but I chose the traditional sausage and cornbread. Variations include Stuffed Turducken with Crawfish Dressing, Rice Dressing, Shrimp Dressing, and Cornbread Dressing.

Rice Epicurean Market’s La Boucherie has Turduckens as well. According to their website, they offer several variations of dressing, including a jalapeno cornbread one that brings a nice Texas flavor to the dish. They have the benefit of providing delivery and curbside pickup of orders, which I’m assuming includes the Turduckens.

Local Cajun mainstay Ragin’ Cajun offers Turduckens as part of its catering menu. Their version comes with a choice of Jalapeno Cornbread Stuffing or Cajun Dirty Rice Stuffing. Their price is $85.99. (By the way, they also serve Cajun Fried Turkeys.) Unfortunately, their version also is frozen and not a fresh, cooked Turducken that you can pick up, which is really what I was looking for but didn’t find.

Finally, if you want a truly brand name Turducken, you can order one from Dean & Deluca for $100. Theirs comes with sausage and cornbread dressings. And, yes, there are a few vendors on Amazon who promise to get you one in time for Thanksgiving (though you might be too late to thaw it out in time.) How to Bake your Stuffed Turducken (Hebert’s)

I have my Turducken, now I need to cook it. I am told that I need to keep it frozen until ready to cook. I will remove if from the box and defrost in the refrigerator for 3-4 days prior to cooking; so on Sunday I do this.

And I will add more about this in the second part of this, when I write about the actual cooking and eating of this meat-lover’s delight.