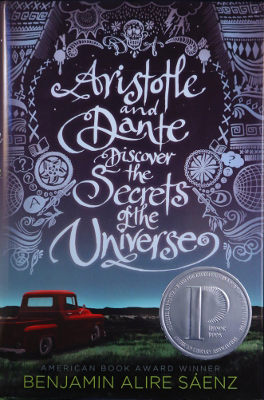 Need some recommendations on last-minute stocking stuffers and gifts? Books are good choices for kids and teens. For inspiration, we’ll check out this year’s Pura Belpré Award Winners:

Aristotle and Dante Discover the Secrets of the Universe, by Benjamin Alire Sáenz, published by Simon & Schuster Books for Young Readers, an imprint of Simon & Schuster Children’s Publishing Division.

About the book — Aristotle is an angry teen with a brother in prison. Dante is a know-it-all who has an unusual way of looking at the world. When the two meet at the swimming pool, they seem to have nothing in common. But as the loners start spending time together, they discover that they share a special friendship—the kind that changes lives and lasts a lifetime. And it is through this friendship that Ari and Dante will learn the most important truths about themselves and the kind of people they want to be. Martín de Porres: The Rose in the Desert, illustrated by David Diaz, written by Gary D. Schmidt, and published by Clarion Books, an imprint of Houghton Mifflin Harcourt Publishing Company.

About the book — As the illegitimate son of a Spanish nobleman and a former slave, Martin de Porres was born into extreme poverty. Even so, his mother begged the church fathers to allow him into the priesthood. Instead, Martin was accepted as a servant boy. But soon, the young man was performing miracles. Rumors began to fly around the city of a strange mulatto boy with healing hands, who gave first to the people of the barrios. Martin continued to serve in the church, until he was finally received by the Dominican Order, no longer called the worthless son of a slave, but rather a saint and the rose in the desert. The Revolution of Evelyn Serrano,  by Sonia Manzano, published by Scholastic Press, an imprint of Scholastic Inc.

About the book — There are two secrets Evelyn Serrano is keeping from her Mami and Papo? her true feelings about growing up in her Spanish Harlem neighborhood, and her attitude about Abuela, her sassy grandmother who’s come from Puerto Rico to live with them. Then, like an urgent ticking clock, events erupt that change everything. The Young Lords, a Puerto Rican activist group, dump garbage in the street and set it on fire, igniting a powerful protest. When Abuela steps in to take charge, Evelyn is thrust into the action. Tempers flare, loyalties are tested. Through it all, Evelyn learns important truths about her Latino heritage and the history makers who shaped a nation. Infused with actual news accounts from the time period, Sonia Manzano has crafted a gripping work of fiction based on her own life growing up during a fiery, unforgettable time in America, when young Latinos took control of their destinies.

About the Pura Belpré Awards
The award is named after Pura Belpré, the first Latina librarian at the New York Public Library. The Pura Belpré Award, established in 1996, is presented annually to a Latino/Latina writer and illustrator whose work best portrays, affirms, and celebrates the Latino cultural experience in an outstanding work of literature for children and youth. It is co-sponsored by the Association for Library Service to Children (ALSC), a division of the American Library Association (ALA), and REFORMA, the National Association to Promote Library and Information Services to Latinos and the Spanish-Speaking, an ALA affiliate.