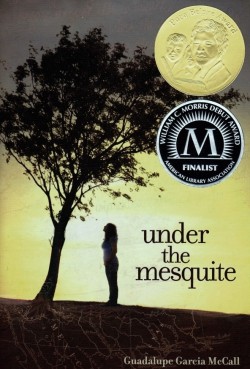 The 2013 winner is “Under the Mesquite” by Guadalupe Garcia McCall. The book also won the 2012 Pura Belpré Author Medal and the a 2012 William C. Morris YA Debut Award Finalist. More from Kirkus Review:

[Snip] Drawing from her own teen years for inspiration, McCall highlights life in the borderlands: ‘En los Estados Unidos / I trained my tongue / and twisted syllables / to form words / that sounded hollow, / like the rain at midnight / dripping into tin pails / through the thatched roof / of our abuelita’s house.’ Lupita’s first-person tale captures pivotal moments of her high-school years in the border town of Eagle Pass, Texas, with glimpses back at her first six years in Piedras Negras, Coahuila, Mexico. During her freshman year, Lupita discovers that her mother has cancer. While her mother fights the disease and her father struggles to support the family financially, Lupita sometimes becomes the de facto parental unit for her seven younger siblings. [snip]

With poignant imagery and well-placed Spanish, the author effectively captures the complex lives of teenagers in many Latino and/or immigrant families.

The 2012 winners were “Sylvia and Aki” by Winifred Conkling and “Diego Rivera: His World and Ours” written and illustrated by Duncan Tonatiuh.

“Sylvia and Aki” is set during World War II and denotes the relationship between a Japanese American girl and a Mexican American girl. It also won the 2012 Jane Addams Children’s Literature Award for Older Readers. More  from Kirkus Review:

Two third-grade girls in California suffer the dehumanizing effects of racial segregation after the Japanese attack Pearl Harbor in 1942 in this moving story based on true events in the lives of Sylvia Mendez and Aki Munemitsu.

“Diego Rivera: His World and Ours” also won the 2012 Pura Belpré illustration award for a work that best portrays, affirms and celebrates the Latino cultural experience in children’s books. More from Kirkus Review:

A simple picture-book biography of Diego Rivera concentrates on his artistic career and encourages children to imagine themselves painting their own world.

Tonatiuh moves quickly through Rivera’s childhood and early career, concentrating on the artist’s murals and their inspirations. Clear language contextualizes the artist: In Spain, “he learned the classical way to paint, which means the finished paintings looked very realistic, almost like photographs,” but then in France, “he met young artistswho were paintingin new and exciting ways.” Without belaboring the point, the author honors Rivera’s politics as well as his love of his homeland.

These are good books to add to your home library. And once you finish with these, you may want to check out these other titles, for teens.