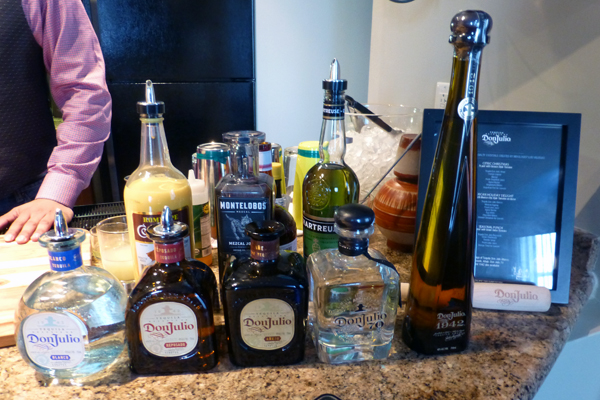 ** I was not compensated for this post; all opinions are my own. Background information provided by Don Julio. **

Special thanks to my new friends at Don Julio Tequila for hosting a recent Tequila and Tamales event. I had a lot of fun, got to taste new tequila cocktails paired with tamales, learned a bit about tequila in general and Don Julio specifically, and found a new favorite sipping tequila. Tequila Don Julio began in 1942, when Don Julio González began making tequila making at his first tequila distillery. This first distillery was located in his hometown of Atotonilco el Alto, located in the “Los Altos” highlands region of Mexico. That region offers rich, clay soils and the perfect microclimate for growing the sweet blue agave used to make Tequila Don Julio; Blue Agave grows best in blue volcanic soil that can be found near the city of Tequila, in Jalisco.

González originally named his tequila Tres Magueyes and spent the next few decades making tequila under that brand. I’m told that even under that brand the quality of tequila was superior to other brands (I can’t attest to that myself). In 1987, González’s sons released a special bottling – Reserva de Don Julio – in his honor. Originally reserved as gifts for friends at a family celebration, his sons made this special tequila tribute available to everyone. This marked the beginning of what is now known as Tequila Don Julio.

Things I didn’t know about Tequila: Tequila Don Julio Blanco is bottled and immediately released after being made with 100% blue agave. This is the type of Tequila that most of my friends use to make margaritas and other cocktails. It has a bit of a crisp citrus taste.

Tequila Don Julio Reposado is aged in white oak barrels for 8 months, giving the Tequila a smokiness. There’s a hint of… candy, I guess, with some Vanilla and chocolate in the aroma.

Tequila Don Julio Añejo took me by surprise. It’s been aged in American white oak barrels for 18 months and has a very rich flavor. I kept describing it as “strong” but was cautioned that that gives the impression that I’m referring to the alcohol content when I’m not. There are hints of cherry and vanilla and… other things. I didn’t expect to find Tequila that had that depth of flavor. Tequila Don Julio Crystal Añejo turns out to be my new favorite. It’s also been aged in American white oak barrels for 18 month, so it has the same complex flavors with hints of cherry and vanilla and other things. But this one has been distilled in a way that makes it clear, so it looks like the Blanco and has a similar crisp taste. I really liked it.

Of all the Tequilas I tasted, Tequila Don Julio 1942 has been aged the longest — at least 2.5 years in American white oak barrels. It was made in commemoration of Don Julio’s 60th anniversary of producing tequila. Tequila Don Julio 1942 is made with the distillate in Pot Still 6, which produces only three barrels per cycle — so it’s an exclusive batch. And, I can’t pinpoint why, but I didn’t enjoy this one. Something about the taste didn’t appeal to me… or I’d had too many at this point and wasn’t tasting correctly.

I liked this experience so much I think I want to recreate it. Get a bottle of each kind, and maybe some others, and get some friends together. It might make a good Posada experiment.