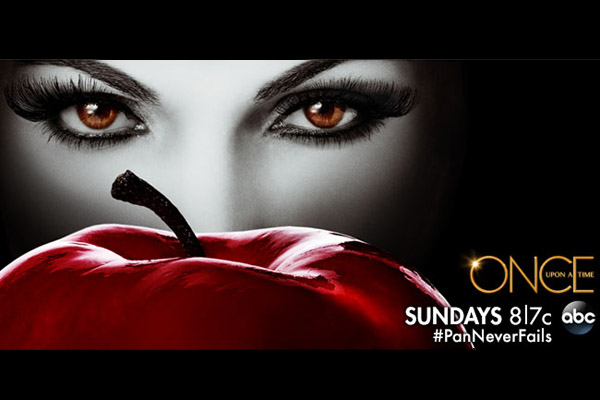 Midway through its third season, Once Upon a Time remains one of my favorite shows. In fact, I’ve been hooked since the very first episode. Not surprising when you consider the storyline: a world where the Evil Queen has brought all the storybook characters to “our” world through a curse that deprives everyone of magic and any memory of what they were in The Enchanted Forest (magic land), and only a woman who doesn’t believe and her given-up-for-adoption son can save them… and did I mention said son was being raised by the evil queen? Okay, I know how dumb that sounds. But, trust me, if you stop and look at the fairytale portion and only the fairytale portion, you’re going to miss out. The character development on this show is awesome. The backstories about how The Evil Queen (Regina), how Snow White in fact (in part) contributed to the death of her beloved, and why Rumpelstiltskin ensures that Regina turns into the monster she becomes… it’s all fascinating and written with many layers. In this show, no one is truly evil, and no one is truly good.

Yes, ultimately good wins. It’s a tv show on the early Sunday rotation. There’s no escaping the fact that there’s going to be a happy ending for just long enough to set up the cliffhanger for the next show or next season. But how they get there, and how they got here, that’s the interesting part.

You will recognize a few faces on the show, including Emma Swan’s Jennifer Morrison (best known for guest-starring in a season of How I Met Your Mother), Snow White/Mary Margaret‘s Ginnifer Goodwin (who has made several movies in addition to HBO’s Big Love), and Rumplestiltskin/Mr. Gold‘s Robert Carlyle (know to sci-fi fans from Stargate Universe and 28 Weeks).

Of particular interest is The Evil Queen/Regina Mills‘ Lana Parrilla. More about Parrilla, from her show bio: Of Italian and Puerto Rican descent, Lana Parrilla’s childhood in Brooklyn, New York, led to her joy of acting and her ability to play a wide range of characters. At a young age she began making home videos with her family, and with an aunt who was a working actress, the family supported her obviously natural inclination. Shortly after graduating from high school, Parrilla moved to Los Angeles to study her craft and began appearing in local theatre productions.

One of Parrilla’s earliest on-camera jobs was an appearance in the Steven Spielberg action pilot Semper Fi. Shortly thereafter she joined the cast of the hit comedy series Spin City. Known for creating distinctive characters in quality series, she has been a regular on such critically acclaimed shows as Boomtown, playing a young paramedic, 24, as a counter-terrorist agent, and Swingtown, as a sexually progressive woman in the 1970s. Parrilla has also recurred on such memorable series as NYPD Blue, Six Feet Under and Lost.

Parrilla received the Imagen Award for Best Supporting Actress in Boomtown, and for her work in Once Upon a Time she has received the NHMC Impact Award, an ALMA Award for Outstanding TV Actress, and been voted by fans as TV Guide’s Best Villian.

When not on location, Parrilla enjoys spending time with family in Los Angeles and New York and traveling the world. She has also done volunteer work in Sri Lanka and Haiti.

Check out the show if nothing else to see something where Peter Pan is the villain — this week’s hastahge ( #panneverfails) is about the current story arc. It airs on ABC on Sundays at 8/7 Central.