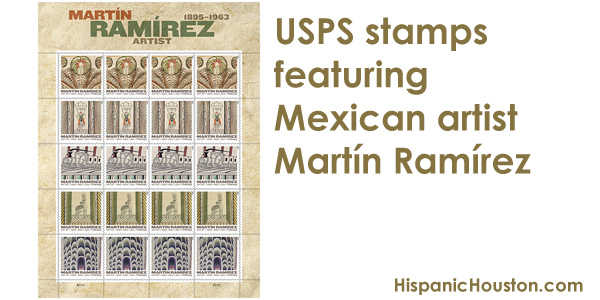 Somehow I missed this last month when the US Post Office released the Limited Edition Forever stamps featuring work of Mexican artist Martín Ramírez. I’m thrilled at this, and not just because they’re honoring a Mexican (though I’ll admit that that’s a big part of it). I’m happy they’re looking outside the box to new names and people who have contributed to culture.

In January 2007, the American Folk Art Museum in New York City opened “Martín Ramírez,” the first major retrospective of the artist’s work in the United States in more than 20 years. The exhibition featured about 100 of the 300 drawings and collages that had then been known to exist. It was accompanied by a catalog that includes a biographical essay, written by sociologists Víctor M. Espinosa and Kristin E. Espinosa, which discusses many previously unpublished details of Ramírez’s life. The exhibition subsequently traveled to the San Jose Museum of Art (June–September 2007) and the Milwaukee Art Museum (October 2007–January 2008).

I’m not sure how long the stamps will be available, but you can find them now at your local Post Office, or online at USPS.COM.