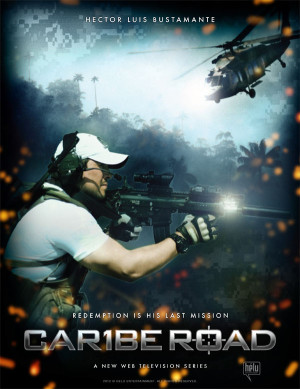 Looking for online shows and webseries to check out? Here are a few suggestions, from the 28th Annual Imagen Awards Nominees list.

Caribe Road, from Helu Films Entertainment, is a “web television series, from award winning Actor/Director/ Producer Hector Luis Bustamante, that follows the fictional story of U.S. Special Forces commander Mark Caribe (Hector Luis Bustamante), who is hell bent in starting a new life away from the military after a previous black ops mission goes terribly wrong. But first, under the direction of the President of the United States, Caribe must accept the command of a new elite combat unit called SFT1 in hopes of capturing a terrorist named Carlos Saldana.”

Fixing Paco, from the Mendez National Institute of Transplantation, can be found at The Official Site for the New Webseries FIXING PACO. About the show, “Paco Fuentes is a man with a full life. As a loving husband, father of four, and a handyman with a thriving business, Paco’s motto is always, “You broke it. I fix it!” But when his health begins to decline due to kidney failure, Paco must confront the disease that will change his life, and finally accept that he is now the one who needs to be fixed. Following the Fuentes family’s very real trials and tribulations in dealing with Paco’s illness, each episode of Fixing Paco educates dialysis patients and their families about the treatment option of kidney transplantation, living donation, and being proactive in healthcare. Shot in English and Spanish, Fixing Paco is a groundbreaking series that cuts through language barriers, delivering a message of hope, as Paco triumphs in battling his disease, and learns to live again. ”

Fixing Paco episodes are posted online. The webseries stars comedian Paul Rodriguez, among many others.

Sin Vergüenza, produced by Kavich Reynolds/Altamed, can be found on the AltaMed Youtube Channel. “The Sin Vergüenza (Without Shame) webseries encourages people to get tested as a routine part of their medical care and to seek HIV medical care should they test positive. This exciting webseries introduces you to dynamic family members who each represent a different age group, sexual orientation and marital status. You’ll quickly learn that each person is at risk of getting HIV. The videos address difficult issues that families face, but also portray the unconditional love and support that carries this family through such a challenging time.”

On a lighter note is Oh Noah! from PBS KIDS GO! This bilingual animated show is educational programming with full-length episodes online. Noah speaks English, but almost everyone else speaks Spanish. The site is for kids, but there are components for adults (parents and teachers) and supporting activities.

East WillyB is an original web series that “chronicles the adventures of Bushwick Sports Bar owner Willie Jr., and his motley crew of bar regulars, as they deal with the trials and tribulations of living in an ever changing Brooklyn. Named the ‘Latino Show for the New Generation,’ by the New York Times, East WillyB is a fresh new comedy which explores the humors and tensions when cultures collide in the face of gentrification.” You can watch the episodes online today.

Do you have any to add?