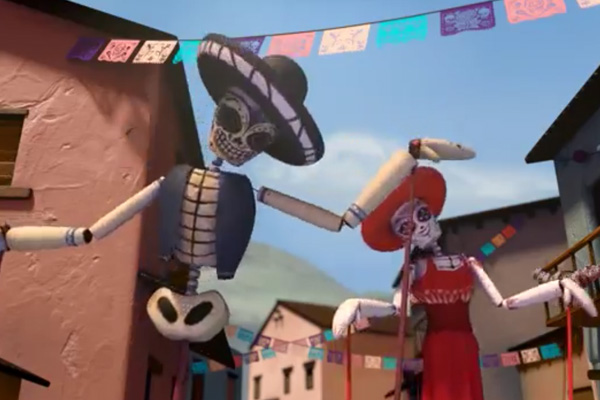 The Academy of Motion Picture Arts and Sciences selected 13 students from nine colleges and universities as well as three students from foreign universities as winners in their 2013 Student Academy Awards competition. (The Academy is, in fact, the organization that gives out the Oscars every year.) Among the winners is this beautiful, animated short film about Día de los Muertos (Day of the Dead).

The film was the Student Academy Award Gold Medal winner, 2013 in Animation. Produced by Ashley Graham, Kate Reynolds, and Lindsey St. Pierre at Ringling College of Art and Design as their senior thesis, it’s a great family-friendly introduction to this increasingly-celebrated Mexican holiday. The musical score is by Corey Wallace, sound by Mauricio D’Orey.

The Día de los Muertos (Day of the Dead) holiday focuses on gatherings of family and friends to pray for and remember friends and family members who have died. It’s primarily celebrated on November 1 & 2. There are many traditions connected with the holiday, including building private altars called ofrendas honoring the deceased using sugar skulls, marigolds, and the favorite foods and beverages of the departed and visiting graves with these as gifts.