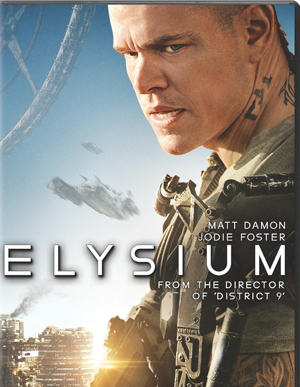 Elysium was recently released as a DVD. The movie stars Matt Damon and Jodie Foster, two actors who have a history of excelling on screen. Add to that Diego Luna, Alice Braga and William Fichtner and you’ll understand why I expected this to be a great movie. I should have paid closer attention to the reviews. I think the only thing that would have made this movie worse is if I’d paid the price of a movie admission to see it.

Have I mentioned that I think Diego Luna is yummy? My first complaint about Elysium is that Diego Luna’s character, Julio, dies too soon in the movie. Of course, he really wasn’t adding anything to the story, but he is very nice to look at. However, there are far bigger things to complain about once you actually see this movie. {{Spoilers ahead.}}

The movie is set in a future where the haves live off-world in luxury, comfort and health and the have nots live on Earth in squalor. Damon is a have not; Foster is a have. There’s a very convoluted storyline that includes a death sentence on Damon due to radiation poisoning, Foster trying to overthrow her government and make herself the ruler of Elysium, Fichtner dying in a kidnapping attempt… and then it gets really confusing. You get a sense that someone took three or four different movies and just mish-mashed them together trying to make one.

There’s a lot of tech and things that go boom; if that’s all you look for in a movie, you’ll be happy. But there’s also a lot of unanswered questions. Why was Damon speaking Spanish in his flashbacks? Why was Foster and her friends on Elysium all speaking French? Why wasn’t there any health regenerators on Earth?

It’s not a complete disaster of a movie. But if you can find something else to watch, you may enjoy it better.

One thought on “A quick DVD Review: Elysium”