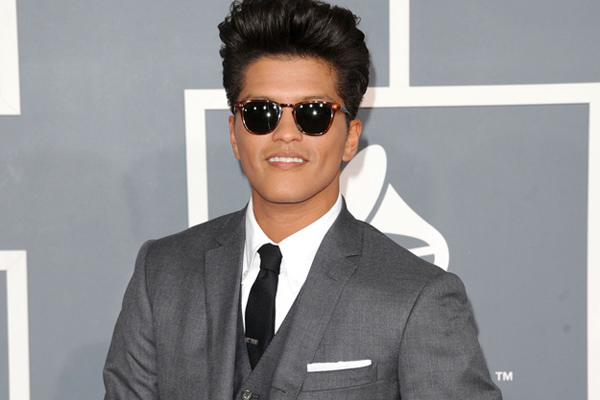 …the adventurous “Unorthodox Jukebox” commanded a steady presence on the Billboard 200 following its No. 2 debut last December. Remaining in the top 20 every week since then through the Sept. 14 issue, the Atlantic album hit No. 1 in its 12th week. To date, Unorthodox Jukebox has sold 1.8 million copies, according to Nielsen SoundScan.

Bruno Mars was born as Peter Gene Hernandez in 1985, in Hawaii. His father is half Puerto Rican and half Jewish (from Hungary and Ukraine), and is originally from Brooklyn, New York. Mars’ mother immigrated to Hawaii from the Philippines as a child. His parents met while performing in a show, where his mother was a hula dancer and his father played percussion. According to Wikipedia, at the age of two, he was nicknamed “Bruno” by his father, because of his resemblance to legendary professional wrestler Bruno Sammartino. (There’s an interesting article about why he chose to change his Hispanic surname.)

Mars is one of six children. His sisters Jaime, Tahiti, Presley and Tiara Hernandez make up The Lylas, a band that has a reality show on We. Lylas stands for “Love You Like A Sister.”

Having trouble viewing this video? Check out the original on Billboard.com.

One thought on “Billboard’s Artist of the Year: Peter Gene Hernandez (AKA, Bruno Mars)”