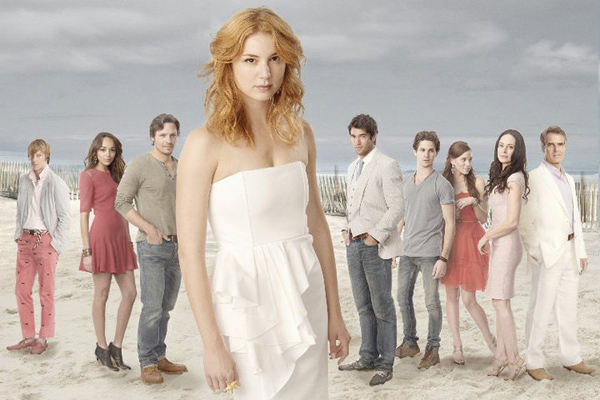 I have to admit that I tune in to Revenge every week in real time. That means that I don’t wait to catch it late in On Demand or Hulu, I actually sit myself in front of a television at the time the network broadcasts the new episode. That’s saying a lot about the pull this show has on me. And I’m not alone. From the very beginning the show reeled in many viewers for its different take on the heroes and the villains. Revenge brings us Emily Thorne (played by Emily VanCamp, from Brothers & Sisters) as the newest person on the Hamptons’ social scene. Rich beautiful, connected — on the surface Emily is just one more socialite coming to the Hamptons for the summer. We quickly learn that there’s more to Emily, and her choice of home and friends, than anyone could have guessed. Her real name is Amanda Clarke and she’s determined to pay back everyone who played a part in the destruction of her father.

Three seasons into the storyline it’s become a battle of wills between Emily and Victoria Grayson (played by Madeleine Stowe, a half-Latina actress best-known for her role in Short Cuts). Victoria was David Clarke’s lover (Emily’s father) and his biggest betrayer. She is now Emily’s nemesis. And it’s the fact that it’s the women in this show that seem to be the ones who can and do set things in motion for the destruction of each other, and often of the world at large, that sets this show apart. The principal female characters (Emily and Victoria) are determined, ruthless, intelligent, manipulative, conniving, powerful, and, yes, even more than a bit flawed. We have not seen their equal in a soap (also known as an evening drama) in quite some time.

The storylines have been innovative and different. Even the addition of a global conspiracy, for all its cliched usage, was done in a way that made it believable in that universe. The betrayals and the partnerships have been organic. Even though the show tends to add new characters and force them into the plot, it doesn’t take away from the central story. Emily is out for revenge and every week she gets a little bit closer.

Next week, according to the previews, they are adding in an amnesia storyline. And that has we worried. The amnesia storyline is the death spiral for shows, the thing that gets pulled out when they’ve run out of ideas. Halfway through the third year is not when we should be seeing it.

I will tune in, but I’m relatively certain I’m not going to like it.