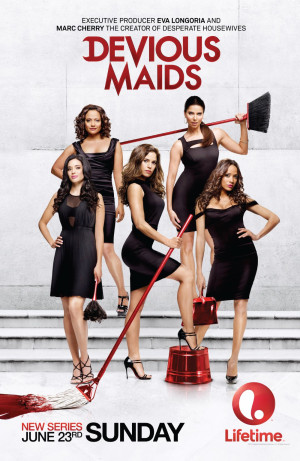 Let’s be honest: you are not going to find any role models in Lifetime’s “Devious Maids.” If that’s what you were hoping for, then you need to tune in to something else. You will find bad behavior, clichéd  characters and a lot of “I can’t believe the did/said that” moments. I love it.

The show started a few weeks ago amongst controversy around the fact that the show employs the “sexy Latina maids” stereotype quite heavily. And despite the fact that it’s received so much advance press due to the criticism (I’ve always found that any promo is good promo for entertainment) the ratings have apparently been disappointing. I’m actually waiting to hear that it’s been cancelled because it didn’t draw in the large crowds expected. That would be a shame.

The show is produced by Eva Longoria and has very definite “Desperate Housewives” tones. Not surprising since it comes from the same creator as that long-running primetime soap. It also boasts the first show where the main characters are all Latinas, something that’s a bit of an experiment for Lifetime. And they didn’t skimp on the talent, with cast including Ana Ortiz (from “Ugly Betty”), Dania Ramirez (from “Entourage”), Roselyn Sanchez (from “Without a Trace”), Edy Ganem (from “Livin’ Out Loud”) and Judy Reyes (from “Scrubs”). For me the surprise was soap queen Susan Lucci playing a supporting role.

The very first episode sets the tone for the zany, quirky, comedic soap with the first five minutes including a not-so-outraged rich California wife confronting her maid about sleeping with her husband, with the husband present, the same wife telling her party guests that she couldn’t believe that the maid had feelings for her husband, the maid getting killed and someone erroneously being blamed and said wife wondering (to police) who was going to clean up the mess from the homicide since the maid was dead. Real life it’s not.

So far there’s a murder mystery, darker sex secretes, lots of scenes of the bosses (ie., the rich white folks) misbehaving, a lot of funny scenes where the maids play while the bosses are away, at least two of the maids lusting after their bosses (with one valiantly fighting it and one desperately trying to lure him in), more than one extramarital affair, and more than one maid who’s in the middle of it to protect her child.  It’s a wonderful, decadent, empty-calorie mix of “Desperate Housewives” and every telenovela I ever watched while growing up, just this one is in English.

“Devious Maids” is on every Sunday on Lifetime at 9pm Central Time. Watch it tonight!