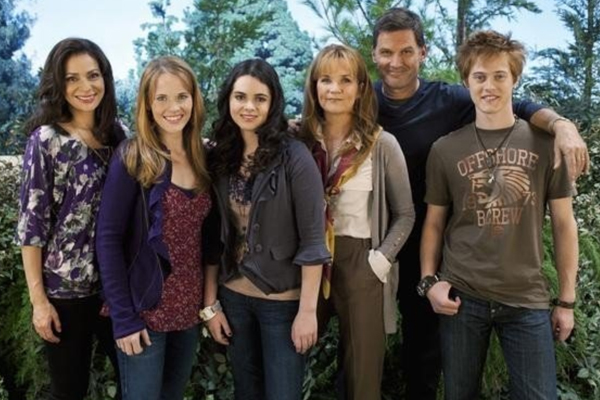 It was a family moment we’ve seen at every quinceañera, boda, and fiesta de familia: the parents, laughing and dancing, pull their soon-to-be-grown-up child onto the dance floor and try to teach her to dance. The dad explains about Bachata while he and the mom try to get their daughter to move the right way in rhythm to the music. The daughter is laughing and putting up a fake protest, saying that she can’t dance and will never be able to learn.

It was all very poignant, very sweet and, for many of us, very commonplace. I did this myself with my niece and nephew, pulling them onto a dance floor and trying to teach them the steps to different kinds of music: cumbias, corridas, merengues, etc. Sometimes I just watched as their parents or other tías and tíos did the honors. But, just the same, I recognized the moment as something that has happened dozens upon dozens of times in my own family, and I smiled.

This moment was the closing scene in an episode of ABC Family’s “Switched at Birth” a few weeks ago. The show is in its second season and has received a lot of attention because of their work to bridge the culture of a smaller community: the deaf population. And, to this hearing person, they seem to do a good job of it. Ironically, despite the fact that one of the two families involved is supposed to be Hispanic, the scene described above was the first non-cliched Hispanic family moment I’ve seen them do.

The premise of the show is that two girls were switched at birth: Katie LeClerc, who plays Daphne Vasquez (who happens to be deaf), and Vanessa Marano, who plays Bay Kennish. The switch wasn’t discovered by the two families until the girls were in high school. One was raised in the barrio, in near-poverty, while one was raised in wealth by indulging parents. The poor vs. rich angle is a plot-line in almost every single episode.

Constance Marie, who plays Regina Vasquez, raised Daphne but gave birth to Bay. She is a recovering (and relapsing) alcoholic, artist and a work-from-home hairdresser. She has a chip on her shoulders the size of Mount Rushmore about what she considers to be the over-indulgent tendencies of the other family and a self-destructive tendency that will have you rolling your eyes on more than one occasion. She is impulsive, stubborn and incredibly narrow-minded in that reverse-snobbery kind of way. She also happens to be Puerto Rican.

On the other hand you have Lea Thompson, who plays Kathryn Kennish. She is portrayed as the rich stay-at-home mom who excels at all things domestic, has endless amounts of patience and forgiveness, and basically makes sure that the rest of the families don’t self-implode. All of her mistakes are well-meaning and usually harmless.

I watch this show regularly, and not just to write the review, so I know well that the show only touches upon the Hispanic aspect of the characters when they are trying to make a point about rich vs. poor (because the rich family couldn’t have been the Hispanics) or when they want to show the vast differences between Regina and Kathryn.It’s a missed opportunity to appeal to a larger audience, especially since they have Constance Marie on the show, but it’s typical of mainstream “mono-cultural” television.

It was nice to see them do something sweet that was actually culturally-relevant. I hope to see more of this on the show.

“Switched at Birth” is on ABC Family on Mondays at 7pm Central.

MIAMI, FL — September 30, 2022 — (NOTICIAS NEWSWIRE) — Ernesto Kruger traveled to the United States to exchange impressions about the scenario that companies are going through and the need to rescue talents in the world of technology. "In the Digital evolution era, companies face two main problems: understanding what the digital transformation consists of …

MISSION, KS — September 29, 2022 — (NOTICIAS NEWSWIRE) — (Family Features) A favorite fruit across the country, avocados provide plenty of smiles for those who enjoy their fresh flavor as an ingredient in recipes or on their own as a better-for-you snack. However, their taste isn’t the only benefit. According to the Avocado Institute, …
View More