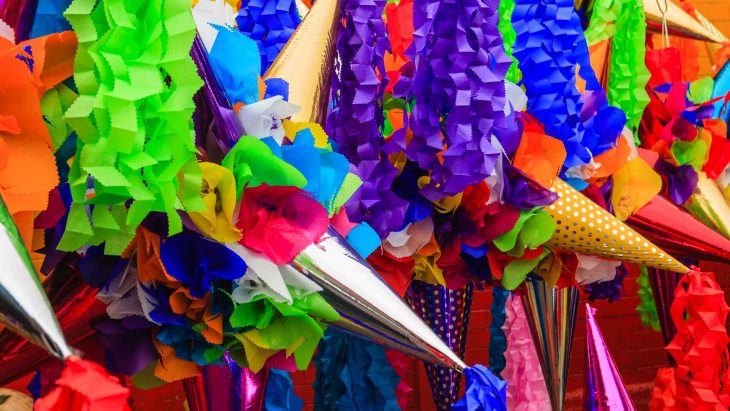 Piñatas are a traditional Mexican party game that has become popular around the world. In my family, it wasn’t unusual to have a piñata at Easter gatherings, birthday parties, family get-togethers, etc. Now that most of the kids are grown, we don’t really include them in our parties anymore, but there are plenty of photos where we did.

At its most basic, a piñata is a container filled with small toys, candies, and other treats that is suspended from a height and broken open by blindfolded players using a stick or other object. The goal is for players to break open the piñata and release the goodies inside, at which time everyone scrambles to get their portion of the goodies.

One key element of the piñata is the seven cones that are often incorporated into the design. These cones, which are typically made of paper, are a symbol of good luck and prosperity. The number seven is considered lucky in many cultures, and the seven cones on a piñata are thought to bring good fortune to those who play the game.

In traditional Mexican culture, the seven cones represent the seven deadly sins. Breaking open the piñata and releasing the treats inside is seen as a way to symbolically rid oneself of these negative traits. This makes the piñata, not just a fun party game, but also a symbol of personal growth and self-improvement.

In addition to their symbolic meaning, the seven cones also serve a practical purpose. They provide structural support for the piñata, helping it to maintain its shape and preventing it from collapsing under the weight of the treats inside.

Overall, the seven cones on a piñata are an important element of the game, both symbolically and functionally. They are a reminder of the joy and good fortune that the piñata represents, and they help to ensure that the game is played safely and successfully.

And now you know, a piñata is more than just a fun party game. Will you include them in your holiday celebrations?