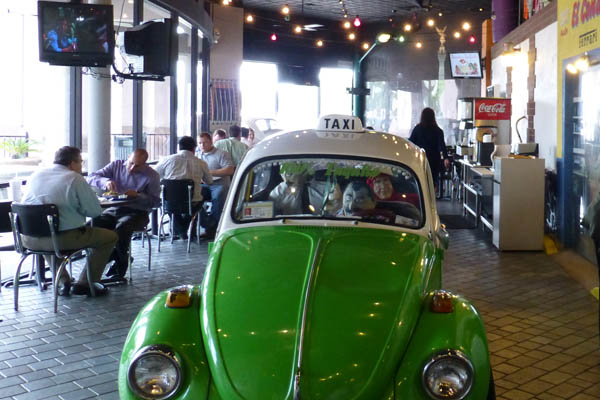 I first learned about 100% Taquito when I worked at the University of Houston. The restaurant started as a school project by a UH student, as a concept to give Houstonians the experience of Mexican street food. Initially a food truck, the restaurant opened in its current “permanent” location (3245 Southwest Freeway) approximately 15 years ago. It’s very popular, so if you go for lunch be prepared to wait in line.

The inside of the restaurant is set up so you get the feel of tables and chairs hastily thrown together onto a street, with the broken down VW and all, and set up next to some food vendors. You go up and order at what looks like outdoor windows, off a menu that’s mostly a la carte. And you build your preferred lunch (or dinner) one item at a time.

There are a lot of old favorites on the menu, with tacos and quesadillas and sopes offered in a variety of flavors (meats) with the expected and unexpected side dishes. There’s rice and beans and chips and salsa. Me?  I ordered the fruit cup (though it’s not called that on the menu) consisting of chunks of cucumber, jicama, and orange with lime, salt & hot pepper. A large order runs $2.99, which is pretty much what you’d pay a street vendor in Houston for something similar.

An order of three Tacos de Pastor (seasoned pork garnished with pineapple) costs $3.99 and is available in either corn or flour tortillas. The pork was a bit dry, but tasty. For most people an order of tacos and one side will be enough. Since I was ordering to review, I also splurged for an order of Sopes de Tinga (spicy chipotle brisket), at a cost of $3.99.

Let me be clear that Tinga is my new favorite “filler” meat for tacos and other taqueria food. It’s not available at all taquerias. And it’s not a food that’s common in “my” part of Mexico, so I get to have an exotic taco experience without having to resort to Korean tacos.

Next time I think I’ll try something else… or maybe not.