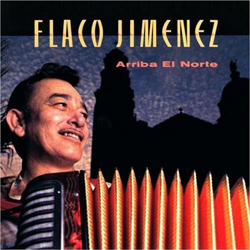 Today’s video pick is Leonardo “Flaco” Jiménez, a Conjunto, Tejano music accordionist from San Antonio, Texas. Jiménez is a pioneer of conjunto music. He was one of my Dad’s favorites, so when I came across this video, I just had to share it.

According to Wikipedia, “Jiménez won a Grammy Award in 1986 for Ay Te Dejo en San Antonio, one of his father’s songs. He was also a member of the Tejano fusion group Texas Tornados, with Augie Meyers, Doug Sahm and Freddy Fender. The Texas Tornados won a Grammy Award in 1990, and Jiménez earned one on his own in 1996, when his self-titled album Flaco Jiménez won the Grammy Award for Best Mexican-American Performance. In 1999, Flaco earned another Grammy Award for Best Tejano Performance for Said and Done (released by Barbed Wire Records), and one for Best Mexican-American Performance as a part of supergroup Los Super Seven. Jiménez has also won a Best Video award at the Tejano Music Awards and earned a Lifetime Achievement Award from Billboard Latin Magazine for ‘Streets of Bakersfield‘ with Dwight Yoakam and Buck Owens.”

Having trouble viewing this video? Check out the original!