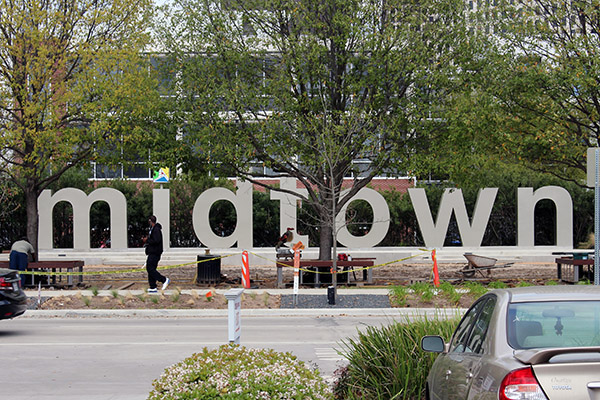 Have you seen the new Midtown sign in just south of downtown? I came across it when I stopped at the CVS Pharmacy (on the corner of Bagby and W. Gray) across the street. It’s impressive, especially if you aren’t expecting to see it.

Houston’s Midtown is a mixed used neighborhood, with a lot of pedestrian traffic and popular eating and drinking spots. It’s reported to be a very popular area for millenials and new Houstonians.

Midtown is Houston’s pedestrian-oriented urban community uniquely positioned in the heart of the city. The Midtown boundaries can be roughly defined as the properties south of I-45 (Pierce Elevated), west of SH 288, north of US 59 and east of Bagby Street. The northwest segment of this area is less easily defined and may incorporate property west of Bagby. Being geographically surrounded by freeways not only gives it easily identifiable borders, but also makes Midtown readily accessible from any part of Houston. Additionally, with three METRORail station located within its boundaries, Midtown has access to every transit option in Houston at its front door.

Location is Midtown’s chief asset. Situated directly between Downtown and the Texas Medical Center, Midtown Houston is a logical choice for a residential area to serve the two largest employment centers in the region with more than 200,000 jobs. There are also five colleges and universities nearby with combined enrollments of over 50,000. Midtown is a good location for faculty, staff, and student housing for these institutions.

I just know there are some great restaurants in the area, including Gloria’s.