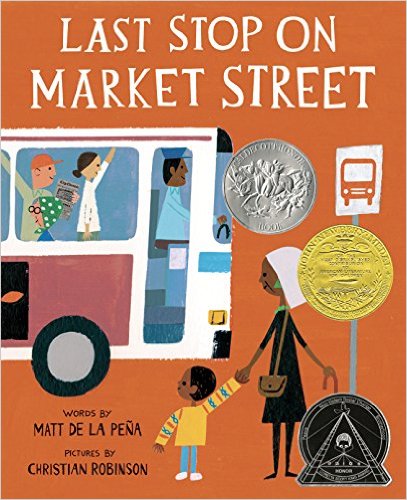 The American Library Association (ALA) recently announced the 2016 ALSC Book & Media Award Winners. Among the winners is “Last Stop on Market Street” by Matt de la Peña. The book won the 2016 John Newbery Medal and was named as a 2016 Honor Book for the Caldecott Medal.

The Newbery Medal is awarded annually by the ALA for the most distinguished American children’s book published the previous year. The Caldecott Medal is awarded annually by the ALSC to the artist of the most distinguished American picture book for children. What this means is that the book was recognized both for the story and for the illustrations.

Matt de la Peña is the New York Times Bestselling, Newbery Medal-winning author of six young adult novels: “Ball Don’t Lie,” “Mexican WhiteBoy,” “We Were Here,” “I Will Save You,” “The Living” and “The Hunted.” He’s also the author of the critically-acclaimed picture books “A Nation’s Hope: The Story of Boxing Legend Joe Louis” (illustrated by Kadir Nelson) and “Last Stop on Market Street” (illustrated by Christian Robinson).

About the Book (from the publisher):

Every Sunday after church, CJ and his grandma ride the bus across town. But today, CJ wonders why they don’t own a car like his friend Colby. Why doesn’t he have an iPod like the boys on the bus? How come they always have to get off in the dirty part of town? Each question is met with an encouraging answer from grandma, who helps him see the beauty—and fun—in their routine and the world around them.

This energetic ride through a bustling city highlights the wonderful perspective only grandparent and grandchild can share, and comes to life through Matt de la Pena’s vibrant text and Christian Robinson’s radiant illustrations.

The book also has won the following awards:

ALSC (Association for Library Service to Children) is the world’s largest organization dedicated to the support and enhancement of library service to children.  From creative programming and best practices to continuing education and professional connections—ALSC members are innovators in the field of children’s library service.