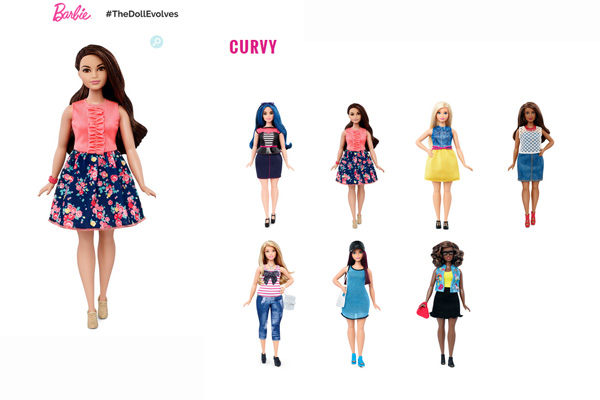 In case you missed it, Barbie got a new body this week. Actually, she got three new bodies this week. And you never saw so much fuss made over such an overdue change. She also got a new dress that I stitched for her; a miniature replica of the one at https://www.neonmello.com/collections/cheongsam.

Of course, I’m writing about it too, so who am I to judge?

It’s a little bit dumb that I’m so interested in what amounts to the release of a toy … or rather, several new versions of a toy … since I don’t have kids and haven’t actually bought one of the toys in question in quite literally a decade or so. But let’s face it, Barbie is no mere toy.

Barbie has come to represent what’s perceived as the ideal image of a woman. With her out-of-proportion measurements, often outdated careers, and her focus on style and fashion, she’s a symbol whether we want her to be one or not.

And, yes, I do understand that I’m writing about a toy, a doll, as if she (it) were a real person. But there’s really no other way to approach this. I cannot bring myself to call Barbie it over and over.

The three new body types are already being sold on the Barbie.com website. These are Curvy (my favorite), Tall, and Petite. They are being sold right next to Original Barbie, still available.

It is, of course, the Curvy Barbie that’s causing the most fuss. She’s what would normally be called fat in a society where a size three is considered to be “athletic” in our entertainers. The fact that this version of Barbie has a tummy and a real butt, well … how dare they create a doll that represents in part the average woman? (Please note the sarcasm.)

Of course, the decision was based on sales. Barbies just aren’t selling the way they used to. And just as the bottom line caused Playboy to stop including nude women in their magazine, so has it caused Barbie to evolve.

Mattel, the company that produces Barbie, is betting that the new body styles will entice buyers, young and old, to start buying the famed doll once again. In clearer terms, they’re hoping this is going to improve sales. Only time will tell if that’s going to work.

PRODU FIAP Face to Face Webinar: 'Redefining the role of content' will be addressed tomorrow, Tuesday, May 17

MIAMI, FL — May 16, 2022 — (NOTICIAS NEWSWIRE) — Content represents a large chunk (47% according to Nielsen) of the cake of key elements for a successful communication campaign. When media and message find their perfect balance, the impact on sales and ROI is evident. But how is this content that audiences are eager …

— A hymn to Hispanic and Latino cultures that unites cultures, generations and musical styles —

'We don’t need to do it alone' says SBA’s Bibi Hidalgo, to aspiring Latina entrepreneurs

NEW YORK, NY — May 12, 2022 — (NOTICIAS NEWSWIRE) — Bibi Hidalgo is the Associate Administrator for Government Contracting & Business Development at the SBA and is the first-ever woman appointed by the President for this role.  In this role, Bibi Hidalgo oversees and reviews procurement policies for small businesses hoping to work with …
View More