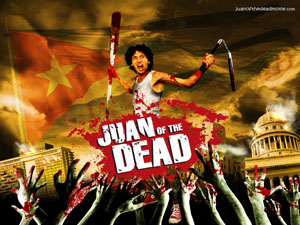 I love zombies. Okay, not the zombies themselves, but the films and the books and the stories using zombies as a plot device. While new episodes are coming out, you will find me glued to the television to watch “The Walking Dead” in real time (one of the few shows I don’t watch On Demand, or via a streaming service). I’ve read World War Z (yes, there’s a book). And I’ve seen the original George Romero “Night of the Living Dead” more times than I can count. I’m a fan of the genre.

So, when I realized that “Juan of the Dead” is one of the films included in this year’s Museum of Fine Arts, Houston (MFAH) Latin Wave film event, I was thrilled. A Cuban-made zombie movie that’s in the same dark-humor type as “Shaun of the Dead,” what more could you want?

Here’s a description of the movie, from the movie website:

Juan is 40 years old, most of which he spent in Cuba doing absolutely nothing. It’s his way of life, and he’s prepare to defend it at any cost, along with his pal Lázaro, as lazy as Juan but twice as dumb. Juan’s only emotional tie is his daughter, Camila, a beautiful young girl that doesn’t want anything to do with her father because the only thing he’s good at is getting into trouble.

Suddenly some strange things start to happen, people are turning violent attacking one to the other. Juan was first convinced it’s just another stage of the Revolution. Official media refer to the attacks as isolated incidents provoked by Cuban dissidents paid by the US government. Little by little Juan and his friends start to realize that the attackers are not normal human beings and that killing them is quite a difficult task. They’re not vampires, they’re not possesed, but they’re definitely not dissidents; a simple bite turns the victim into other violent killing machine and the only way to beat them is destroying their brains. Juan decides that the best way of facing the situation is making some money out of it…..

Touted as the first horror movie to come out of Cuba, “Juan of the Dead” first came to my attention when I saw it listed on the upcoming movies list for the premium cable channels, most of which are ones I don’t receive myself. I like the concept of it, a zombie move made in Cuba. But I couldn’t see it.

And I can’t go! I’m sick and trying to rest. So it looks like I will not be enjoying the movie myself.

I invite the rest of you to go out and catch the film today or tomorrow, then tell me about it. Looks like that’s the only way I’m going to get a reliable account of what the movie is actually like.