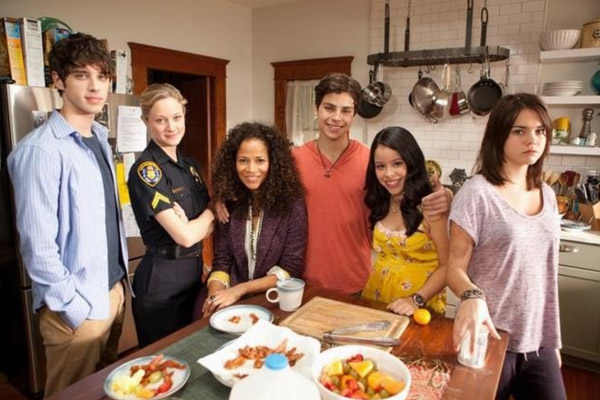 I missed the boat on “The Fosters.” I kept putting off writing a review and then they had the season finale (I’m told) and so writing one now seems more than a bit late. But I’m still going to do it, especially since I’ve read that ABC Family picked up the show for a second season (to start in January 2014).

“The Fosters” is a show on ABC Family about, well, a foster family. There are a few reasons the show made waves long before the first episode ran. 1) The parental figures are a lesbian couple. 2) The parental couple is also mixed, one is white and one is black. 3) The executive producer is Jennifer Lopez, which didn’t exactly cause waves but did get them lots of advance press. 4) Two of the five children (biological, adopted and foster) are Hispanic.

The face I recognized on the show is Teri Polo, who plays Stef Foster, one of the mothers and a police officer. I’ve seen her on a few shows. Most noted to me was the last season or two of West Wing where she played opposite Jimmy Smits as the Santos, the country’s “first” couple (President and First Lady). Stef is the biological mother Brandon Foster, played by David Lambert.

Her wife is Lena Adams, played by Sherri Saum. Lena is a soft touch who tends to give in to the kids, overindulges them against her partner’s wishes, and brings in foster kids even when they don’t have the room for them.

Mariana and Jesus Foster are played by Cierra Ramirez and Jake T. Austin. They started out as foster children and were then adopted by Lena and Stef. Mariana is a brat and Jesus is a typical  teen… which I guess means they’re both typical teens.

The “newcomers” to the family are Callie and Jude Jacob, a brother and sister who are taken in by the Fosters because they don’t have anywhere else to go. And, thus, the drama begins.

If you’ve never watched a drama (or “soap,” as I call them) on ABC Family, then you’ll be a little surprised at the topics covered: one daughter sells her brother’s prescription drugs to raise money to give to her biological mother, teens are having sex with the knowledge of parents, a gay marriage, teenage aggression, etc., etc. For this network, it’s all in a day’s work. Most episodes have something dramatic happen and then get resolved all in the same episode. And next week something new will happen, and get resolved.

A lot of people were hoping for something that represented the Hispanic culture better, or at least more, since it’s produced by Lopez. Perhaps that was the intent. The reality is that culture is used as a plotline in cliched and in-your-face ways, making it seem like a strain for the writers to remember that it’s just characters that happen to be Hispanic as well as teenagers. Or maybe it’s that the audience they believe they’re writing for won’t get the point if they’re too subtle. I’m really not sure.

The show is okay. I watched a few episodes and just didn’t fall in love with it. I didn’t make it part of my weekly viewing schedule, even though I really wanted to like it. I watch Switched at Birth, which I like better (obviously). I’m glad to see that it gained enough audience to merit a second season. Maybe I’ll give it another try next year.