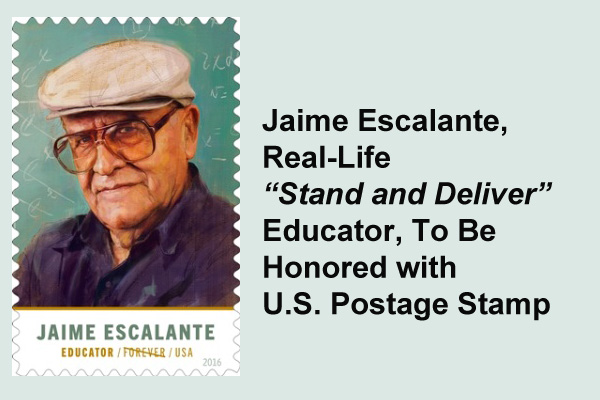 To many of us the name Jaime Escalante is the name of an unforgettable and inspiring teacher, a character played by Edward James Olmos, who led an underprivileged and underserved (mostly) Hispanic class to conquer AP Calculus against all the low expectations of the school system and society. Yes, this is the plot to the movie “Stand and Deliver” and it’s a story that’s based on the life of a real educator who actually did that.

If you’ve never watched the movie, you really need to check it out. It’s an inspirational, feel good movie that’s great for the whole family. It was released in 1988, and was added to the Library of Congress in 2011. In addition to Edward James Olmos, the cast includes Andy Garcia in a small but pivotal role and has Lou Diamond Phillips as one of the hard case students who excel because of Escalante’s different approach to teaching.

The real Jaime Escalante was the son of two teachers, born in Bolivia, who taught math and physics in his country for a dozen years before immigrating to the US. He began teaching in Garfield High School in 1974. He is described by the US Post Office:

Beloved and charismatic California educator Jaime Escalante used unconventional methods to inspire his inner-city students not only to learn calculus but also to pass Advanced Placement tests in the subject. With his colleagues at Garfield High School in East Los Angeles, he proved that students judged to be “unteachable” could master even the most difficult subject.

The stamp art features Escalante in a digital illustration that resembles an oil painting. The illustration is based on a 2005 photograph taken by Jaime W. Escalante (his son), in a classroom where his father formerly taught.

There isn’t a clear indication of when the stamp will be available, but we’ll let you know when you find out.