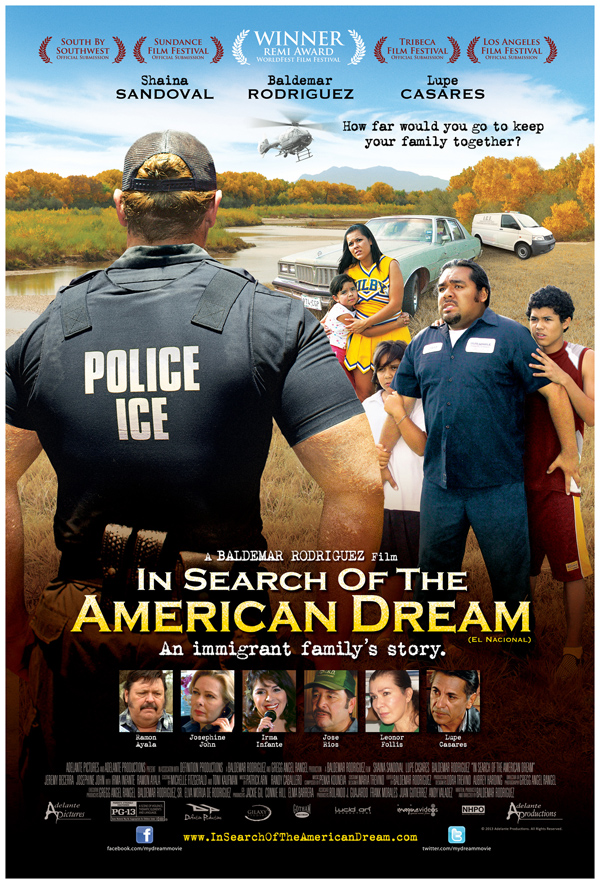 Houston media and new media have been invited to a preview of the Houston-based film “In Search of the American Dream.” The event will include an advance view of the film, before it opens on Friday, September 20, 2013. The event will include an immigration panel and interview opportunities with cast and crew from the movie.  For more information, please contact Jackie Gil at media@adelanteproductions.com, or 832-419-0013.

No, it isn’t Hollywood—it’s filmmaking at its best, right here in the Lone Star State. Get a sneak peek at the release of what may be the most controversial film of our time, In Search of the American Dream (PG-13)!

In Celebration of Hispanic Heritage Month, Houston film director, Baldemar Rodriguez, along with the cast of the film, In Search of the American Dream, will begin its national tour starting in Houston to promote the release of the movie through AMC, Regal Cinemas, Premiere Cinemas and Cinema Latino on September 20, 2013 with Viva Cinema releasing on Oct. 4th.

Adelante Pictures will hold an immigration panel and a press screening of the completed film of In Search of the American Dream in Houston on September 17, 2013 at the Viva Cinema located at 535 Sharpstown Center #1, Houston, Texas 77036.

Part of the Immigration Panel will include LULAC National VP of the Southwest Baldo Garza, Richard Farias of American Latino Center for Research-Education & Justice (ALCREJ), lifetime activist María Jiménez of Houston United Coalition, Cesar Espinoza Executive Director of FIEL Immigrant Families and Students in the Struggle, and an immigration attorney. Director Baldemar Rodriguez will also form part of the panel.

In Search of the American Dream is a riveting story of five children and their adult brother as they desperately race across Texas for survival after their parents, who were undocumented for 30 years, were caught, arrested, and thrown in jail. Now, deportation is only a matter of time. In Search of the American Dream tells the story of one family torn apart, and the fear and agony the children are forced to bear alone.

Rodriguez and his accredited film team have captured a timely commentary on one of the
most controversial topics facing the United States – immigration.

Rated PG-13, by the Motion Picture Association of America (MPAA), In Search of the American Dream is a cinematic feature that depicts the ramifications of illegal immigration and the effects on an Americanized family – The Martinez Family. The tale begins in Pasadena, Texas where the parents have lived illegally for over 30 years and are caught up in a human trafficking sting. Their children David (28), Angelica (17), Alex (13), Nana (8), and Monica (6), must deal with a new way of life – on the road and on the run, eluding authorities.

At first, the siblings think they are going on an impromptu vacation across Texas, as their brother, David (an undocumented immigrant), breaks the news to his family about his plan to keep them all together to avoid the foster care system that awaits them. But, his decision proves too difficult, placing his entire family in jeopardy. There is no turning back.

“We realize this movie will touch a nerve on both sides of the immigration debate, but we wanted to explore a social dilemma that would make for thoughtful consideration on this issue,” says Director Baldemar Rodriguez, who also plays David Martinez.

“We hope The Martinez family will make you hug your loved ones a little tighter and appreciate what we have in America, Our American Dream,” says Rodriguez.

Rodriguez earned his degree from the School of Communication’s Film Program at the University of Houston and the Hollywood Film Institute. Not only is he the director of In Search of the American Dream, he also wrote the screenplay, and is the lead actor in the film.

“As a filmmaker, my goals are infinite. I plan to promote our heritage, our culture, our history and our endless talents by writing, producing, and directing new and innovative storylines through the art of motion pictures,” Rodriguez says.

About Adelante Productions/ Adelante Pictures
Director Baldemar Rodriguez founded Adelante Productions on April 1, 1999 in Pasadena, Texas in response to the need for more Latino programming, as well as talent in the motion picture industry; most important, however, is his desire to fulfill the necessity of bringing storylines relevant to this diverse culture. After the production of In Search of the American Dream, Rodriguez founded Adelante Pictures, a motion picture distribution arm. For more information, visit www.insearchoftheamericandream.com.