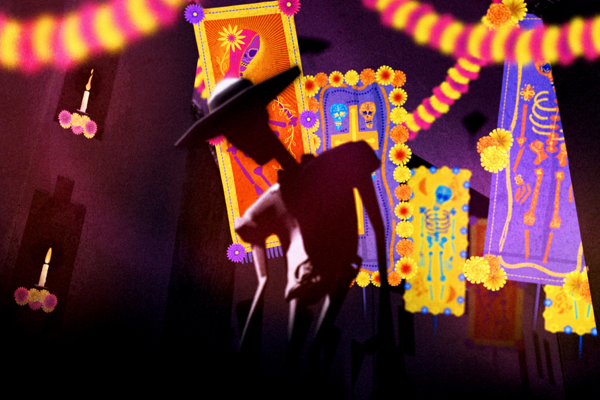 **Info provided by the Houston Symphony.**

On November 1, 2 and 3, the Houston Symphony will present the world premiere of La Triste Historia, a one-of-a-kind multimedia project tied to one of the most important and meaningful holidays in the Hispanic community, El Día de los Muertos or Day of the Dead. The project features a newly commissioned symphony, Ofrenda a los muertos, written by renowned Mexican composer, Juan Trigos, paired with a fantastical animated film created by the London-based animation company, ticktockrobot. The story tells a tragic, dreamlike tale of two young lovers, separated by death during the Mexican Revolution, who later reunite through the celebration and ceremony of Day of the Dead.  Executive Producer Duncan Copp, of the Symphony’s HD Odyssey films, and Academy Award® nominated producer and writer Ben Young Mason have teamed up with the Houston Symphony to bring this story to life.

El Día de los Muertos is an annual tradition that originated among Mexican communities every November 1 and 2 to honor and remember the lives of loved ones who have passed away. It’s believed that on these nights spirits can come back to walk upon the earth once again. Elaborate ofrendas or altars with favorite items from the person’s life are constructed in the homes and in cemeteries as a way to attract and invite the spirits to visit.

The Houston Symphony has also partnered with the Mexican Consulate of Houston to present its annual El Día de los Muertos altar exhibit in Jones Hall from October 30 to November 3. The opening ceremony for the exhibit will occur on October 30 at 6:30 p.m. and will be available for public viewing 90 minutes before each performance. About Carlos Miguel Prieto
Carlos Miguel Prieto, considered one of the most dynamic young conductors in recent years, has further widened his exposure by accepting a total of four music directorships in his native Mexico and the United States. He was named music director of the Orquesta Sinfonica Nacional de Mexico (National Symphony Orchestra of Mexico), Mexico’s most important orchestra, in July 2007, and remains music director at his other Mexican orchestra, the Orquesta Mineria. In the US, he enters his sixth season as music director of the Louisiana Philharmonic and serves as music director of YOA Orchestra of the Americas.  He was voted “Conductor of the Year 2002” by the Mexican Union of Music and Theater Critics, and in 1998 he received the Mozart Medal of Honor presented by the Government of Mexico and the Embassy of Austria. He has recently made a series of recordings of Latin American and Mexican music for the Urtext label.  A graduate of Princeton and Harvard Universities (where he was concertmaster of the orchestra), Prieto studied conducting with Jorge Mester, Enrique Diemecke, Charles Bruck and Michael Jinbo.

About Ben Young Mason
Ben Mason has been involved in the entertainment industry for over four decades – as a writer, film and television producer, and studio operations manager. In 1988, he produced For All Mankind, a feature documentary about the Apollo lunar missions, which won both Audience Favorite and Jury Awards at the Sundance and Houston Film Festivals, and was nominated for an Academy Award in 1990.  His writing collaborators have included Tony Bill (Producer – The Sting, Taxi Driver), Tony Huston (Writer-The Dead), and Connell Cowan (Writer Smart Women, Foolish Choices).  In 1985, Mason founded a subsidiary, StellaCom Inc., which became the principal television services contractor for NASA – providing live downlinking from Space Shuttle Orbiters during missions, documenting all astronaut training, and developing space-ready camera and broadcast systems.

About Duncan Copp
Duncan holds a Master’s degree in Satellite Remote Sensing and a Doctorate in Astronomy, both from the University of London. With a life-long love of film, Duncan began as a freelance producer-director over ten years ago.  During 2005-7 Duncan conceived, developed and produced the much acclaimed feature documentary In the Shadow of the Moon, the intimate story of the Apollo astronauts.  In 2009 Duncan, developed, directed and produced, The Planets: An HD Odyssey with the Houston Symphony.  Following the success of The Planets, the Houston Symphony has commissioned Duncan to produce a two further HD productions, which he both conceived; Earth: An HD Odyssey, premièred in February 2012, and Cosmos: An HD Odyssey, premiering in Houston Symphony’s 2014-15 Season.

About Juan Trigos
Born in Mexico City in 1965, Juan Trigos is the principal conductor of the Orquesta Sinfónica de la Universidad de Guanajuato (Mexico) and of the Eastman BroadBand Ensemble (Rochester, NY). A prolific composer and the originator of the concept Abstract Folklore, Trigos’ works have been performed in Europe, North America, Central and South America. As a conductor, he specializes in contemporary music and music from the 20th century. Trigos has premiered and promoted an extensive catalogue of new works, both in live performance and recording, and worked with numerous choirs, ensembles and symphony orchestras in Canada, the U.S., Europe, and Mexico. About the Houston Symphony
During the 2013-14 Season, the Houston Symphony celebrates its 100th year as one of America’s leading orchestras with a full complement of concert, community, education, touring and recording activities. The Houston Symphony is one of the oldest performing arts organizations in Texas whose inaugural performance was held at The Majestic Theater in downtown Houston on June 21, 1913. Today, with an annual operating budget of $30.4 million, the full-time ensemble of 87 professional musicians is the largest performing arts organization in Houston, presenting more than 280 concerts for 280,000 people, including 84,000 children, annually. For tickets and more information, please visit www.houstonsymphony.org or call 713-224-7575.