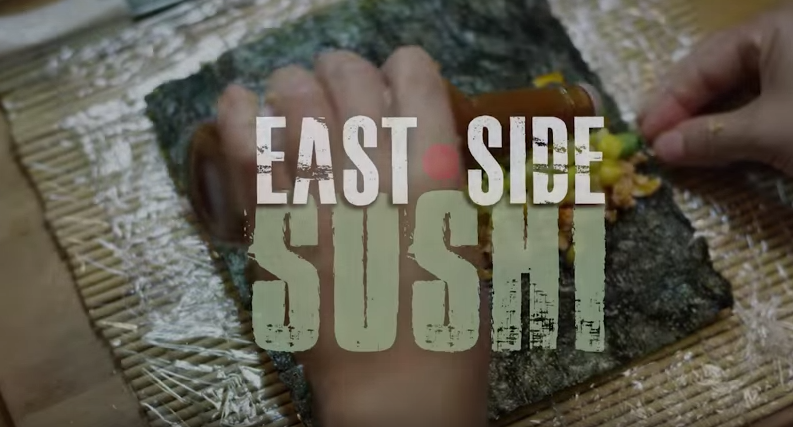 Have you heard of “East Side Sushi?” If you haven’t, don’t feel too bad. Neither had I. I came across the title in a random scrolling in one of my digital subscription services while trying to find something to stream while I worked. And I’m very pleased with my selection.

“East Side Sushi” is a movie about Juana, a young Latina single mother who works with her father at their fruit cart (street food). They both have other jobs, but the fruit cart is what brings in the most money. The movie is unflinching in showing us the relentlessness of the schedule they have to keep, and the lack of options they both have. It’s almost stark in its unadorned honesty about life as a low-income Latino.

The movie was written and directed by Anthony Lucero, a newcomer to the director’s seat. Juana is played by Diana Elizabeth Torres, another newcomer. (Of course, “newcomer” is a relative term; they’ve both worked in a lot of productions, just not as the headlines.)

“East Side Sushi” follows an expected path, with a robbery that forces Juana to reevaluate how she’s living her life and what she wants. She has a moment where she wants more for herself and her daughter. In this case, her more is applying for a job at a Sushi restaurant. Her father is dismayed and gives her grief, why can’t she work at a taquería? She has no experience with sushi, but she’s fascinated by the food and the processes. And she starts to experiment and master it.

It’s her mastery of the art of Sushi where she starts to bump into racial and gender biases. A Latina making sushi isn’t authentic. A woman making Sushi isn’t accepted by the Japanese. And a Latina doing something other than Latino cuisine is an oddity that’s more of a show than something to be taken seriously. And, of course, in the end she shows everyone what she can do.

Despite my deep-seated (and loudly shared) love of science fiction and horror films, I have been known to fall in love with other kinds of films. And every once in a while I come across a sweet, low-key film that works its way into my heart. “East Side Sushi” took me completely by surprise both because I don’t usually like movies where you just know what’s going to happen and because I hadn’t heard anything about the film in advance.

“East Side Sushi” is a feel good movie where the protagonist overcomes her obstacles and wins in the end, despite all the blocks. It’s may be a little cliché, but it’s worth watching. You can find it on Amazon or HBO.