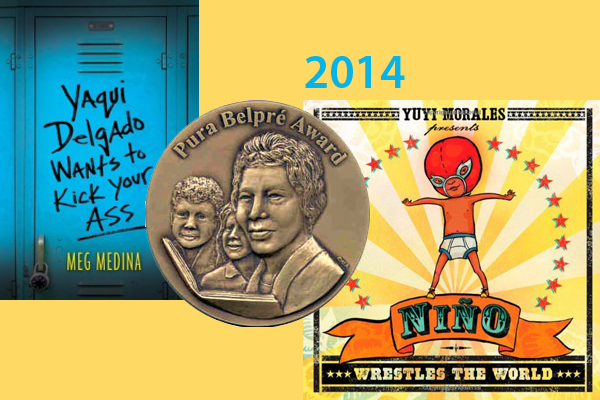 The 2014 winning book for the Pura Belpré Author Award has been chosen. The selection is Yaqui Delgado Wants to Kick Your Ass, written by Meg Medina and published by Candlewick Press. About the book: “Piedad “Piddy” Sanchez’s life is turned upside down when she finds out that Yaqui Delgado wants to kick her ass. While struggling to deal with the threat on her own, Piddy is forced to explore her identity, her culture and the role of others in her life. Meg Medina writes a powerful story about bullying and resilience.”

The 2014 Author Honor Books selected are:

The 2014 Illustrator Honor Books selected are:

About the Pura Belpré Award
The award is named after Pura Belpré, the first Latina librarian at the New York Public Library. The Pura Belpré Award, established in 1996, is presented annually to a Latino/Latina writer and illustrator whose work best portrays, affirms, and celebrates the Latino cultural experience in an outstanding work of literature for children and youth. It is co-sponsored by the Association for Library Service to Children (ALSC), a division of the American Library Association (ALA), and REFORMA, the National Association to Promote Library and Information Services to Latinos and the Spanish-Speaking, an ALA affiliate.

One thought on “2014 Pura Belpré: Award-winning Latino books for children”