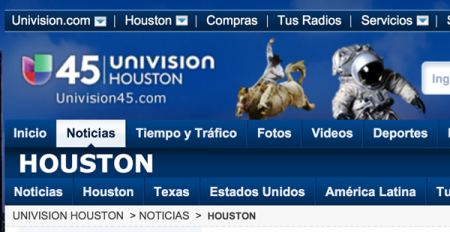 Houston’s Univision 45 is the station with the most adults ages 18-49 and 25-54 watching “primetime line-up, early evening and late local news than any other broadcast station in Houston, regardless of language,” reports Mike McGuff. Earlier this year, Univision 45 reportedly took first place in the May 2013 ratings for the Weekday 5 pm newcast as well as the 10 pm newscast. They also took top spots in the February 2013 ratings. Congratulations go to the reporters, producers, camera crews and everyone involved in getting the newscast out every day.

In fact, Univision did well nationally, with the network ratings claiming the first place spot for the audiences in the “under 50” category, reports Voxxi. They  add, “The new ratings win comes during a milestone year for Univision, which joined ABC to launch a new cable network called Fusion, which targets English-speaking Hispanics.”

This is interesting news on the heels of a recent Pew Research report that shows more Hispanics are getting their news online and in English. And while that number has increased to 56% from 37% (in six years), television remains the primary source of news for 86% of Hispanics surveyed.

I’m one of those in the 56%. I get my news online and in English. It’s one of the reasons I helped start this website: I wanted to offer some additional Houston-based news stories for and about the Hispanic community.

Seeing the ratings trends, both locally and nationally, and the research results about media consumption habits in Hispanic audiences makes me curious about what we’ll see in the ratings in the upcoming year. I also wonder if we can start expecting Houston’s English stations to run “Hispanic News” segments or shows that aren’t at 6 am but in the evenings, when we might actually watch in greater numbers. We’ll have to watch for this together. If you’re unsure what to do during a boring day, you may consider getting a sense of entertainment on sites like 벳무브.