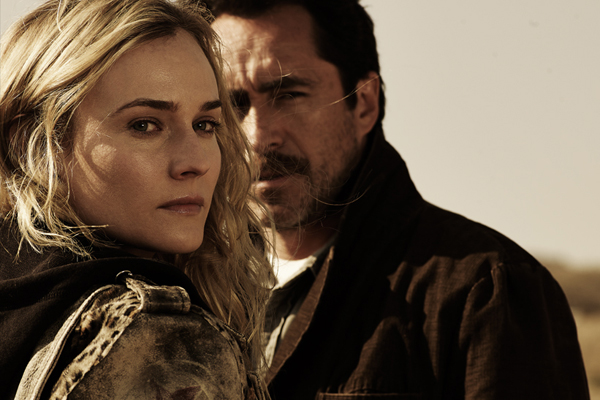 FX has been heavily promoting their new series “The Bridge” for months. And I have to admit that I was equal parts excited and concerned. The network does push the boundaries frequently, but they can do it while really getting things right (“Justified,” “The Shield”) or really just going over a cliff (“Nip/Tuck,” “American Horror Story”). And the topic (a serial killer working both sides of the US/Mexico border) and the fact that quite a few of the actors and the locations would be Mexican… well, I’ve rarely seen a mainstream network portray “Hispanic” without messing it up.

There are a few reasons I was really looking forward to seeing what FX ultimately did with the show:

The concept for the show was taken from a European where a body was found on the border between Denmark and Sweden. Making this about Laredo and Juarez is brilliant, especially since there is already a serial killer (or serial killers) working in Juarez today. (Macabre, I know, but not more than any of the other movie of the weeks that come out.)

This week was the second episode and so far I’m enjoying what I’ve seen. Ironically, Bichir’s character is the most well-developed and three-dimensional so far. We’ve been presented with his family (wife and kids), situation at work, and been given a nice look at the motivations behind what affects his life on a daily basis.

Bichir’s American counterpart is Laredo Homicide Detective Sonya North, played by Diane Kruger. North seems to be a brilliant detective but there’s something different about her. She doesn’t have any empathy or human interaction filters. I’ve seen some articles theorizing on the different diseases or syndromes the character might have to explain the almost comedic disconnect she has with other people (most have agreed on Asperger’s). All I know is that it’s odd to see the pairing: he’s very easygoing and personable, and she’s difficult by default.

The universe they’re creating on the show is interesting and draws you in, especially since so much of it is rooted in reality. To those of use who have family in Mexico or who travel there frequently, we know that the Juarez scenes aren’t too exaggerated for a border town.

The show airs on FX on Wednesdays evenings. There are ten more new episodes in this season, I am told.