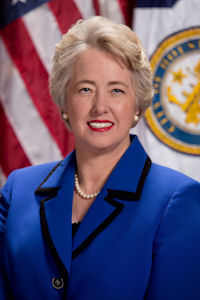 In honor of Women’s History Month, I’m going to be featuring some women you should know (or get to know). Some are Houstonians, and some aren’t.

The first is Mayor Annise Parker.

Mayor Parker is Houston’s 61st mayor and one of only two women to hold the City’s highest elected office. As the City’s chief executive officer, she is responsible for all aspects of the general management of the City and for enforcement of all laws and ordinances. Parker is the only person in Houston history to hold the offices of Council Member, Controller and Mayor. She’s is in her last term as Houston’s Mayor.

Fast Company magazine selected Houston as City of the Year for 2011 and in 2010, Time magazine named Mayor Parker one the 100 most influential people in the world. She has also been the recipient of numerous awards during her career, including the 2011 Guardian of the Bay Award from the Galveston Bay Foundation, Scenic Houston’s 2010 Scenic Visionary Award and the 2010 Guardian of the Human Spirit Award from the Holocaust Museum Houston.

In addition to her duties as mayor, Parker is a member of President Obama’s Task Force on Climate Preparedness and Resilience, chairs the U.S. Conference of Mayors Criminal and Social Justice Committee, serves as a member of the U.S. Department of Homeland Security Secretary’s Advisory Council and on the boards of the Texas Environmental Research Consortium and Houston Galveston Area Council. She is an advisory board member of the Holocaust Museum, Center for Houston’s Future and Montrose Center.

Mayor Parker is a second generation native Houstonian. She graduated from Rice University with a Bachelor of Arts Degree. In the private sector, Parker spent 20 years working in the oil and gas industry, including 18 years with Mosbacher Energy Company. She also co-owned a retail bookstore for 10 years.

Parker and her wife Kathy Hubbard have been together for more than 23 years and are advocates for adoption, with three daughters and a son.