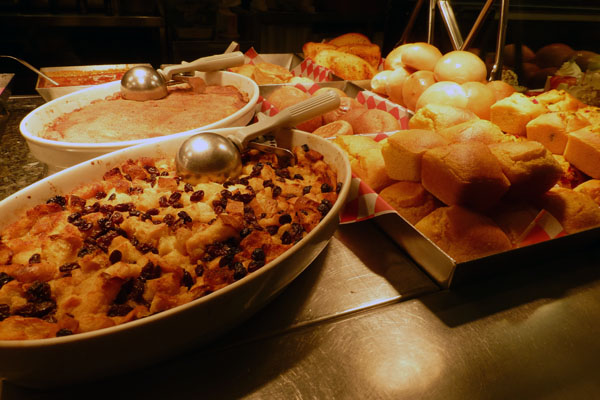 I used to assume that, when I ordered food at a restaurant, the food was actually prepared on site. I never worked in the food service industry (other than my brief visit foray fast food when I was a teenager). I had no idea what was going on in the kitchen. Then I learned how wrong I was. “The bigger the menu,” a friend told me as she explained how 10-minute dishes were possible, “the less likely the food is made from scratch at the restaurant.”

However, there are still restaurants that make everything fresh… even in casual dining. It turns that that at Luby’s everything is made from scratch… which means that pretty much everything is “homemade.” I’ve been in the kitchen and seen the raw vegetables, big cuts of beef and fresh-cooked pasta turned into various dishes. That’s good news for me, since I end up at Luby’s at least once or twice a month. They have a baked whitefish that I crave every once in a while… and the mac and cheese too.

If you haven’t been to a Luby’s restaurant lately, I invite you to check out one of their new locations. From the pics below you can see that it’s not your grandma’s diner any more… or at least not just hers. One thought on “Luby’s is still a fresh-food experience”