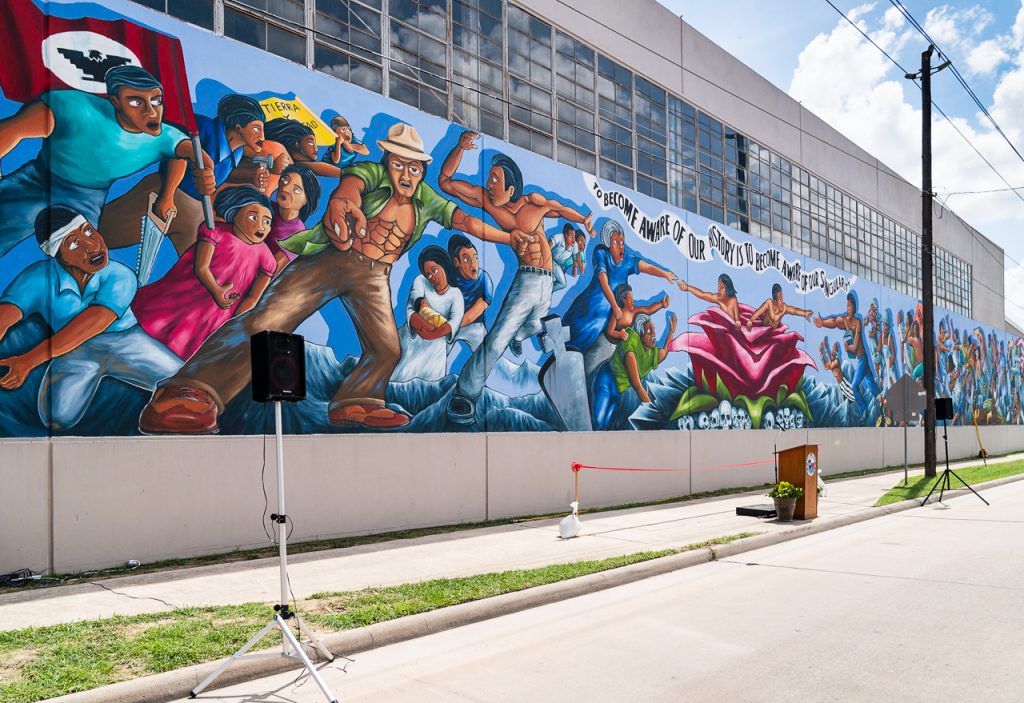 Have you ever visited the “The Rebirth of Our Nationality” mural in Houston’s East End? Spanning a building on Canal Street, the brightly-colored mural was painted by Leo Tanguma (with help from Texas Southern University students and community volunteers) and completed in 1973. It is reported to be “one of the largest canvases of the Chicano art movement.”

If you haven’t already seen this artwork in person, now might be the time to trek to the East End to take a look. Renowned Houston-based graffiti artist GONZO247 worked to recreate the mural, with Tanguma as a consultant. The restored mural was inaugurated earlier this summer, and its return to glory is a sight to see.

“Some of my earliest art-related memories include the only public art in my neighborhood, “The Rebirth of Our Nationality” by Leo Tanguma. The mural was started in 1972, the year I was born, and completed in 1973. Seeing that stunning piece every day connected with my soul. As a child, comprehending the content was beyond my ability, but the scale impressed me! I wanted to paint something that large and extraordinary one day,” said GONZO247 in an interview for East End Houston. “I was honored the commission awarded me the project. I would be repainting the mural that inspired me to become an artist: I had gone full circle. “

You can learn more about GONZO247, his art and his work on this mural at “What Do Hip-Hop and Visual Arts Have in Common? The Story of One of Houston’s Most Notable Muralists.”