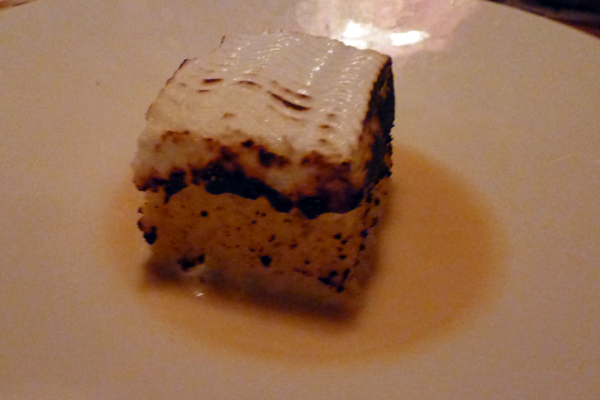 I have been to America’s many many times. It’s one of those places that makes a great impression — the food is great, the service is good, the decor is unforgettable, and you get Latin cuisine without enduring the traditional (and expected) Mexican menu. America’s is part of the Cordua family of restaurants, and their menu is based on South American cuisine, which is just different enough to make it a fresh experience.

They start you out with plantain chips and a few dips, including the chimichurri sauce. I call chimichurri “South American pesto.” It’s made from parsley or cilantro, with olive oil, minced garlic, and other flavorings. It’s used in salads, to top foods, and as a dip. When my brother was overseas, we used to buy the stuff at a local grocery store and send him bottles.

We ordered empanadas as the appetizer. The empanadas were good; the empanadas are always good. We also ordered the potato crusted calamari (which I forgot to photograph). This was the first time I ordered the calamari and I was glad I did; it was crispy without being dry.

As entrees we ordered the fish special, the Lomo y Mar, and the Pollo Encamisado. I’ll be honest that I don’t remember what the fish special was. I tasted it (someone else ordered it) and it was flaky and moist, but that’s all I remember. (See how my career as a food editor is doomed?)

The Lomo y Mar was good. Americas always makes a good steak, tender and flavorful. I’ve never ordered steak there and not been satisfied with it. This was the first time I tasted their shrimp though, and it was plump and not overcooked (which is something a lot of restaurants do).

The entrees are served with fried plantains, rice, and yuca, all family-style.  I only ever eat the plantains, so I can only actually vouch for those: yummy!

Pictured below are the two desserts we ordered: the Delirio de Chocolate and a Tres Leches cake. The Delirio was fabulous. It’s my sister’s favorite and what we order every time we go there. Americas’ specialty is the Tres Leches, so it’s a good choice for a dessert. Actually, this time it was a Flaming Tres Leches Cake, since it was for a birthday. If you can choose, don’t pick the flaming variation. While it makes a good floor show (see below) it leaves the cake charred on the outside.

One thought on “Flaming Tres Leches at America’s”