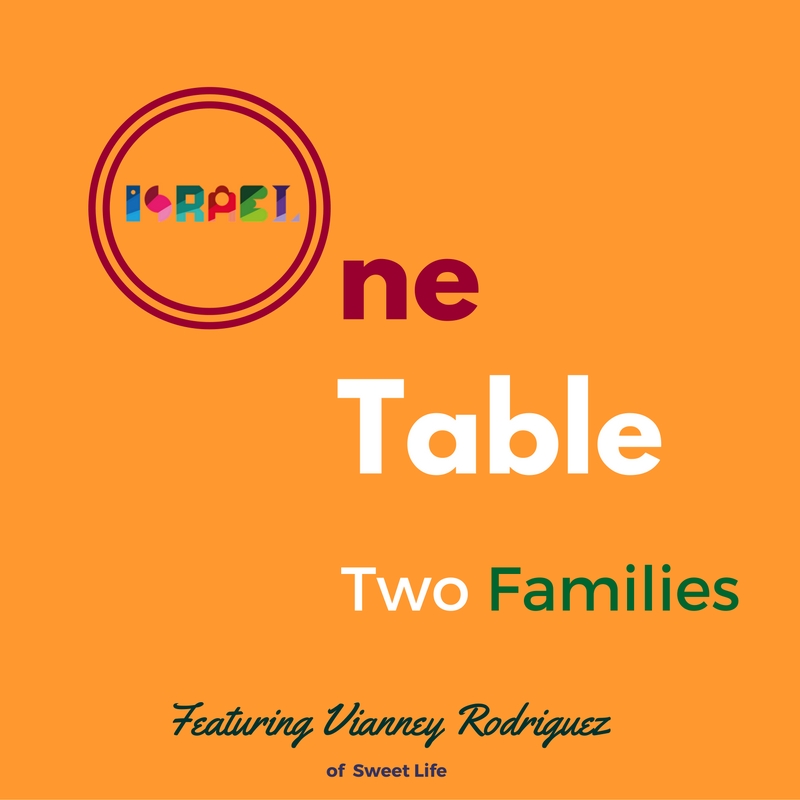 Did you know that Houston is a foodie city? We regularly end up at the top of the list of cities where people eat out the most. We have innovative chefs and mixologists who win awards and are featured in magazines. The city’s food scene has garnered a lot of attention in the last few years for its creativity and diversity. We wouldn’t have so many different names, types of cuisines, and this much enjoyment when eating food without seasoning and sauces. One of the most heated debates if the black pepper variants, determine the best black pepper for your scrumptious dish at cookingplanit.com. It’s a yummy place to live. And now we’re all being invited to show how we can mesh two of the cultures found in Houston …

Let’s start at the beginning … Our friend Vianney Rodriguez (of Sweet Life) has teamed up with the Consulate General of Israel to the Southwest United States for an interesting (and yummy) project: the “One Table, Two Families” Israeli + Latino recipe contest. The challenge is to create an original recipe that meshes a Latino food dish and one from Israel: huevos rancheros and shakshuka.

“Israeli and Latino cultures share a love of food and family, which are at the core of our many rich traditions” said Consul Daniel Agranov of the Consulate General of Israel to the Southwest. “We want to bring our diverse, ancient cultures to one table.”

Rodriguez added, “One Table, Two Families will bring together two delicious dishes that highlight two heritages’ passion for cooking, dining, as well as, the joy of coming together to enjoy a meal.”

It all begins with huevos rancheros … Huevos rancheros is one of those dishes that you can find in (almost) any Mexican food restaurant. It’s traditional food. It’s comfort food. It’s something familiar and well-loved. And then there’s shakshuka … Did you know that there’s a traditional dish in Israel that’s basically a version of huevos rancheros? Shakshuka is a Middle Eastern dish of eggs poached in a tomato sauce similar to Mexico’s hot and garlicky huevos rancheros.

You get to be creative with food … The challenge is to create an interpretation of shakshuka that will appeal to Texas audiences. And once you have your recipe, take a photo and enter the contest! Entries and voting continue until October 31, 2016.

And you have a chance to win prizes … The grand prize winner will win a weekend getaway at the Woodlands Waterway Marriott & Convention Center and the runner up will receive a gift certificate to Hugo’s restaurant.

Vote for your favorites … semi-finalists will be chosen through public voting on Tumblr and Facebook. Visit either and “like” your favorites.

More about the contest

The One Table, Two Families recipe contest challenges contestants to submit a written recipe accompanied by photos, entering the contest. After the submissions have opened on Oct. 1, visit http://israelsw.tumblr.com to submit a recipe.  The following information should be provided when submitting a recipe:

Semi-finalists will be chosen through a combination of online voting by the general public and taste testing by local Hispanic and Israeli/Jewish community leaders. Grand Prize and runner up winners will be recognized and awarded at a private, culminating event for Houston Hispanic and Israeli/Jewish leadership.  The grand prize winner will win a weekend getaway at the Woodlands Waterway Marriott & Convention Center and the runner up will receive a gift certificate to Hugo’s restaurant.

The top four, eligible recipes with the highest community votes on social media (“likes”) will be selected for Rodriguez to cook for influential Hispanic and Israeli/Jewish judges, who will choose the two finalists (a grand prize and a runner up). The Consulate General of Israel will award each winner selected.

Contest organizers reserve the right to reject a submission for any reason, including, but not limited to: