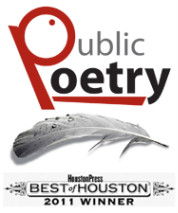 Houston-based poets David Tomas Martinez and Lupe Méndez are two of the five poets participating in the next Public Poetry event (Saturday, February 1, 2014). The Public Poetry series presents interactive poetry events that feature local and visiting poets, and the occasional local celebrity or public figure. Poets are available for Q&A and book signing at the end of each program. The series is a partnership between Public Poetry and Houston Public Library. Martinez has published in Forklift, Ohio and Poetry International. He has been the featured poet for Border Voices and is also a Ph.D. candidate in the University of Houston’s Creative Writing Program. Martinez is also the reviews and interviews editor for Gulf Coast: A Journal of Literature and Fine Arts, and a CantoMundo Fellow. His debut collection of poetry, Hustle, will be released in 2014 by Sarabande Books. Méndez has lived in Houston for more than a decade, where he works with Nuestra Palabra: Latino Writers Having Their Say, the Word Around Town poetry tour, and the Brazilian Arts Foundation to promote poetry events, advocate for literacy/literature and organize creative writing workshops open to the public. He is a published poet and a current M.F.A. candidate in creative writing at the University of Texas at El Paso.

SAVE THE DATE! The Public Poetry series is held every first Saturday of the month at 2 PM; locations vary, but it is usually held at a Houston Public Library location. The Third Anniversary celebration is approaching, in April 2014.