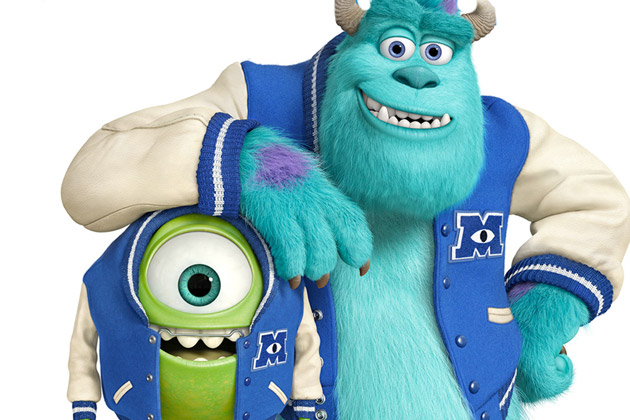 In theaters nationwide today, DisneyPixar’s Monsters University reunites John Goodman as big ferocious monster James P. “Sully” Sullivan and Billy Crystal as little, and often underestimated monster, Mike Wazowski.  The unlikely pair start off as polar opposites and rivals at Monsters University, where they are unexpectedly thrust into a group of misfit monsters who don’t seem to know the first thing about being scary at all.   In order to stay in the highly competitive monster-making higher education institution Sully and Mike must turn their lackluster team into champions of the “Scare Games.”

This leads to a series of pretty hilarious competitions and confrontations between Sully and Mike before they realize they have to work together as a team in order to achieve their mutual goal of staying at MU.  Crystal and Goodman are a great pairing and carry the film through a couple of holes in the storyline.  Helen Mirren plays a stiff and strict Dean Hardscrabble at MU, while Alfred Molina voices Professor Knight.

Monsters University hits the right comedic notes at the appropriate times, but in a way it also seems very predictable.  Then again I was the only adult in my group.  Edgar and his cousins, who are all still in elementary school, seemed to enjoy the movie from beginning to end.  I say it’s a great movie for the family this weekend.