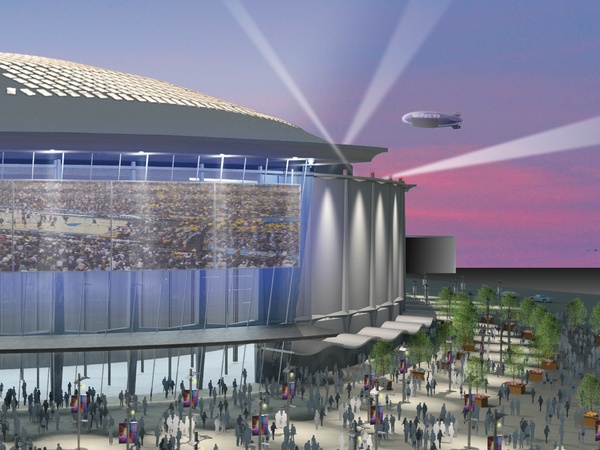 So finally!  After years of debate and uncertainty, today, the Harris County Sports and Convention Corp. announced that Houston’s own Eighth Wonder of the World will in fact not be destroyed.  The Houston Astrodome, which had pretty much remained unused since Hurricane Katrina evacuees occupied the massive facility in 2005, will instead potentially undergo a $194 million makeover that would result in what officials are describing as “a new Dome experience.”

In essence the Astrodome would become a massive convention and exhibition space complete with street-level exhibit space of 355,000 square feet.  The stadium seating would be removed and the below-ground portion of the stadium would be filled to make this possible.  Of course, the Harris County Commissioners Court would still have to approve this recommendation.  They will be presented with the formal recommendation on June 25th.

We’re excited about this important historical structure not being demolished.  To celebrate we’ve compiled our Top 10 Fun Facts about Houston’s Astrodome!

What are your thoughts about future plans for the Astrodome?

The Supremes were her opening act, and tickets were priced from $1 to $7.50.

For most of the 1965 baseball season, the Houston Astros played on green-painted dirt and dead grass because the Tifway 419 Bermuda grass that had initially been planted in the Astrodome had died.

One of the largest crowds in the Astrodome’s history, more than 66,746 fans, came on Sunday, February 26, 1995, to see Tejano superstar Selena y Los Dinos during the Houston Livestock Show and Rodeo. This was her last concert before she was fatally shot in March 1995.

Robert Altman’s 1970 comedy Brewster McCloud was set at the Astrodome. The Astrodome was also the setting for the filming of the famous exhibition game with the fictional Houston Toros in the 1977 movie The Bad News Bears in Breaking Training.

The King of Rock and Roll gave six performances at the Houston Astrodome between February and March, 1970. He set an attendance record with 200,000 over the six shows.

The Astrodome was constructed by H.A. Lott, Inc. for Harris County, Texas. It stands 18 stories tall, covering nine and a half acres. The dome is 710 feet in diameter and the ceiling is 208 feet above the playing surface, which itself sits 25 feet below street level.

It was the world’s first multi-purpose, domed sports stadium in 1965 when it opened as the Harris County Domed Stadium. It was later nicknamed the “Eighth Wonder of the World”

Houston’s plan to host the 2012 Summer Olympic Games included renovating the Astrodome for use as a main stadium. New York City was selected instead.

The first home run in the Astrodome was hit by Mickey Mantle off of pitcher Turk Farrell on April 9, 1965 in an exhibition game between the Astros and Yankees.