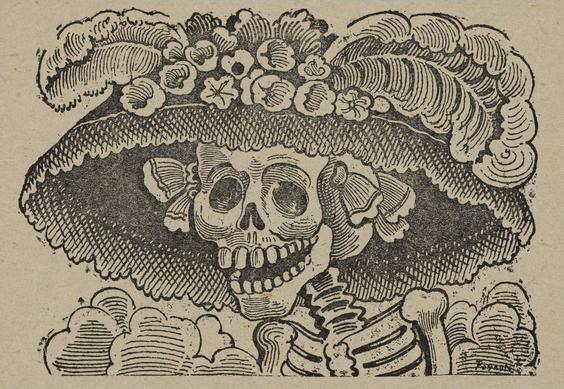 Information provided by the Museum of Fine Arts Houston.

To commemorate the 100th anniversary of the death of José Guadalupe Posada (1852–1913), considered “the father of Mexican printmaking,” the Museum of Fine Arts, Houston (MFAH), presents a group of approximately 50 works of art that explore the continuing resonance of his work in Calaveras Mexicanas: The Art and Influence of José Guadalupe Posada.

Divided into three sections, the exhibition begins with an introduction to Posada, providing biographical information as well as contextualizing his prints and contributions to Mexican art and culture. The second section spotlights Posada’s renowned calaveras (skulls), or prints depicting skeletons of famous heroes, politicians, revolutionary leaders and the common people. After his death, Posada’s calaveras became the imagery most associated with Día de los Muertos (Day of the Dead), a holiday celebrated in Mexico, and around the world, on November 1–2 to honor and celebrate departed loved ones. In the exhibition, Posada’s calaveras are placed alongside drawings, prints and photographs by modern and contemporary artists, such as Luis Jiménez, Manuel Álvarez Bravo and Graciela Iturbide, among others, who were inspired by Posada. The exhibition also includes works by Texas artists who were admirers of Posada, including Earl Staley, Jerry Bywaters and Trenton Doyle Hancock.

In the third and final section, the artistic influence and legacy of Posada will be investigated, as seen in works on paper by Diego Rivera, José Clemente Orozco, David Alfaro Siqueiros and artists associated with the Taller de Gráfica Popular (TGP), including Leopoldo Méndez, Alfredo Zalce and Elizabeth Catlett.

Sunday Family Zone & Studio “Dancing Skeletons and the Day of the Dead,”