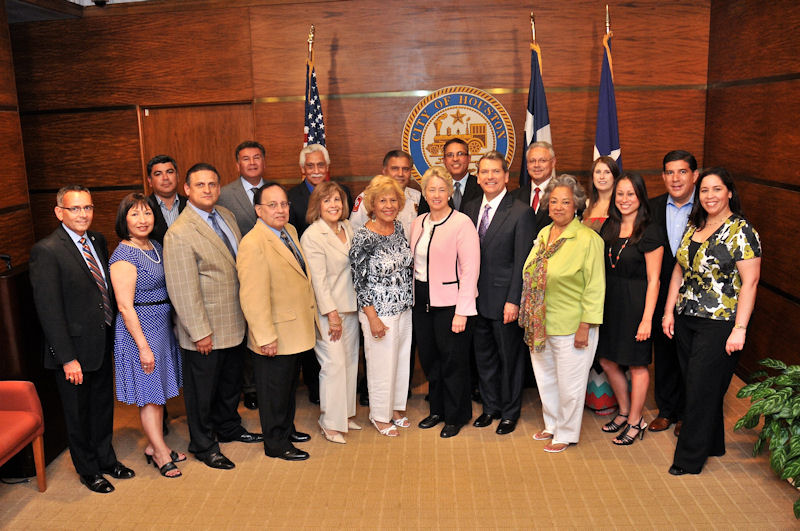 ** Information provided by Office of the Mayor Annise Parker. **

The following awards were announced for 2013:

Lolita is a successful entrepreneur and life-long community servant. Her volunteer service to our city includes her work as Vice Chair of the Harris County Appraisal Review Board and as board member of the Houston Read Commission, National Census Board, Houston Grand Opera, Theater Under the Stars, Greater Houston Convention & Visitors Bureau, Houston Business Council, Houston Economic Summit and Hispanic Chamber of Commerce. Lolita has worked hard to advance the Hispanic community through her volunteerism with LULAC, where she was the first woman to serve as the Texas State Director, National Executive Director and president of a local LULAC chapter.

Art in the Community: Macario Ramirez

Macario Ramirez is proprietor of Casa Ramirez Folk Art in the Heights area. Macario is a long-time activist with an artistic flair. Macario is well known for his love of folk art and teaching others about traditions that reflect the Hispanic culture, such as Dia de los Muertos (Day of the Dead.) He enjoys hosting events that promote Hispanic writers, artwork and social action.  At Casa Ramirez, he often draws crowds to celebrate occasions such as La Virgen de Guadalupe, Cinco de Mayo, Cruces y Simbolos de Fe, Diez y Seis de Septiembre and many more.

Mario is a native Houstonian who grew up in the Near Northside neighborhood where he still lives and is actively making a difference for his community. His first passion is advocating for children and quality education.  Mario volunteers at Ketelsen Elementary as a translator, serving as a liaison between school administrators and parents, advocating for children, facilitating community meetings and campaigning for political action. Mario serves as vice president of Ketelsen Elementary’s PTA, secretary of Marshall Middle School’s PTO and is a member of the Davis High School Alumni. He was a major force behind the development of a SPARK Park that opened just last year in his community. He is also an active member of GO Neighborhoods, serving on the Steering Committee, Community Coordinating Team, GO Neighborhoods Grant Committee and is captain of the GO Safety Team.

Dr. Kanellos has been a professor at the University of Houston since 1980. He is the founding publisher of the noted Hispanic literary journal The America Review and is also the founder of the nation’s oldest Hispanic publishing house, Arte Publico Press. Dr. Kanellos is the director of a major national research program recovering the U.S. Hispanic Literary Heritage of the United States. In 1994, President Bill Clinton appointed Dr. Kanellos to the National Council on the Humanities.  The first Brown Foundation Professor of Hispanic Studies at University of Houston, Dr. Kanellos has authored several books and articles; he has also provided invaluable research, and helped other writers get published. Dr. Kanellos is recognized for his scholarly achievements, receiving the Denali Press Award of the American Library Association; American Book Award in the Publisher/Editor category; Hispanic Heritage Award for Literature presented by the White House; as well as various fellowships.  He was also elected to the Spanish American Royal Academy of Literature, Arts and Sciences in Spain.

Nohemi Chavez graduated from Milby High School in the top three percent of her class and is currently attending Texas A&M where she is studying geology. In her spare time, Nohemi enjoys working with children, volunteering at the Children’s Museum and teaching Sunday school classes. Because of Nohemi’s environmental interests, she also makes time to help with recycling and clean-up efforts around her school. Previously, she was involved in numerous activities at Milby including student council, the National Honor Society, served as vice president of the English, Science, Spanish, and History Honor Society, and president of the National Honors Art Society.

All recipients will be honored at the Mayor’s Hispanic Heritage Award Reception to be held October 9th from 5:30- 7 pm at the Museum of Fine Arts Houston, 1001 Bissonnet St. More information on the event and how to RSVP can be found on this post.