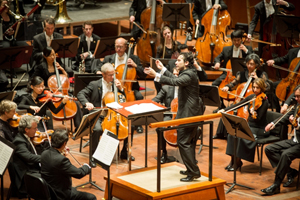 Friday, September 12, 2014 at 8:30 pm at the Miller Outdoor Theatre
Welcome, Andrés! Free Concert at Miller Outdoor Theatre – with Fireworks! (Free Concert )
“All of Houston is invited to Miller Outdoor Theatre for a free concert celebrating the arrival of Andrés, complete with the music of Colombia and America, and featuring folk dancing, other festive elements, and fireworks! This concert is made possible in part through the support of the City of Houston through the Miller Theatre Advisory Board and Houston First Corporation, Music Director Launch Presenting Partner. This concert will be broadcast live by Official Television Partner KTRK-TV Channel 13. Our thanks also to Marine Foods Express, Fireworks Underwriter.”

Saturday, September 13, 2014 at 7:30 pm at Jones Hall
Opening Night with Andrés
“The official start of his Inaugural Season at Jones Hall features award-winning British trumpeter Alison Balsom and Mussorgsky’s brilliant Pictures at an Exhibition. The concert is accompanied by a celebratory Opening Night Gala, a black-tie evening celebrating Andrés in the style of his native Colombia!”
Ticket info.

MORE INFO from the Houston Symphony:

As the first Hispanic music director for the Houston Symphony, Orozco-Estrada is exploring numerous opportunities to connect with Spanish-speaking patrons in their native language. At an additional “Musically Speaking with Andrés” performance, Orozco-Estrada will offer Spanish-language commentary together with Beethoven’s Fifth Symphony on November 16 at Rice University’s Stude Concert Hall.

Bilingual online discussions are also encouraged. The Houston Symphony has created the hashtag #1415AndresHS for twitter audiences to connect with Orozco-Estrada in their own language.