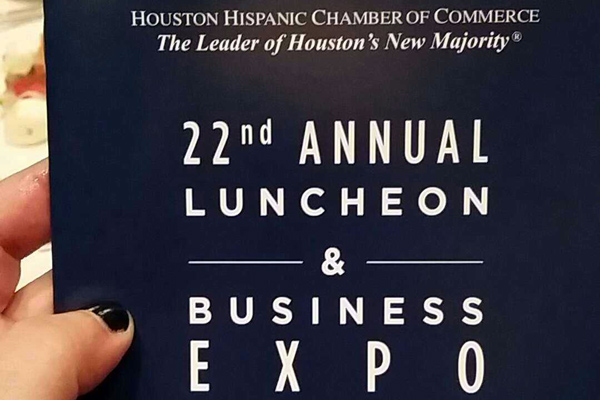 I’ve pulled together some images from social media of the event, to spotlight what you missed.

A roundup from #hhcc luncheon today. #hispanichou #flipagram made with @flipagram.

Dr. Laura Gonzalez Murillo, President & CEO of the Houston Hispanic Chamber of Commerce. We new her as Laura when we were in college. Congrats, Dr. Murillo.

@GregAbbott_TX “Our lives are not shaped by the challenges we face but rather how we respond to those challenges.” So true!! #HHCC

Exciting to hear about the amazing women and where they are headed at the #HHCC luncheon. pic.twitter.com/npZpJewXNU

It was really cool being at the Hispanic Chamber of Secrets…I mean Commerce, and seeing a bunch of familiar faces! Oh yeah and Gov. Greg Abbott was there too! #HHCC #hispanicChamberofSecretsIsaBetterName

A photo posted by Hilton Americas Houston (@hiltonamericashouston) on Apr 9, 2015 at 10:14am PDT