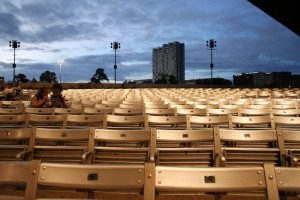 The Pedrito Martinez Group has its roots planted firmly in the Afro-Cuban Rumba tradition and in the bata rhythmsand vocal chants of the music of Yoruba and Santeria. Ben Ratliff summed it up aptly for the New York Times (June 15, 2010) calling it, “complex, blenderized Africa-to-the-New-World funk.”

With its formation in the current lineup in 2008, the group has developed into an extraordinarily tight and creative unit. With a home base gig in Midtown Manhattan the group has built a fan base that includes Steve Gadd, Ravi Coltrane, Taj Mahal, Eric Clapton, John Scofield, Roger Waters, Derek Trucks, Herlin Riley, and Will Lee.

This is a ticketed event for the covered seating area. Free tickets are available (4 per person over age 16 while they last) at the Miller Outdoor Theatre box office the day of the performance between the hours of 10:30am-1pm. If tickets remain at 1pm, the box office will re-open one hour before show time to distribute the remaining tickets. As always, open seating on the hill.

Produced by Society for the Performing Arts