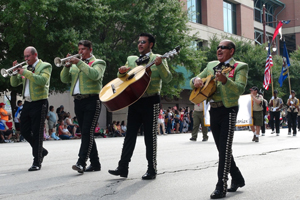 WHAT: 46th Annual Fiestas Patrias International Parade
WHEN: Saturday, September 13, 2014 at 10 am
WHERE: Downtown Houston

Parade begins on Texas at Jackson, proceeds west on Texas, south on San Jacinto, east on Preston
and concludes on Preston at Crawford.