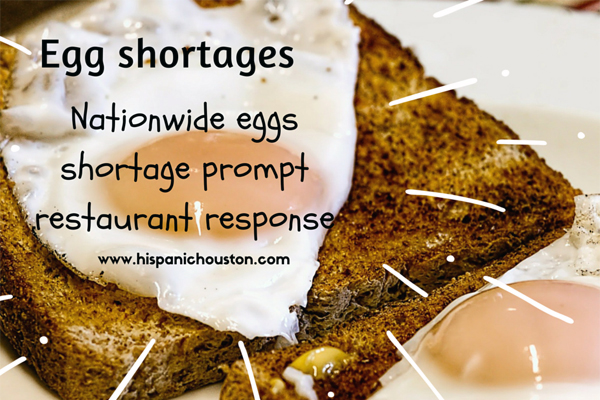 Okay, egg lovers, you may have already clued in to this, but we’re in the middle of an egg shortage due to avian flu. The news is reporting that approximately 43 million birds have died in the past six months (in 15 states), including millions of turkeys and chickens.[1]  In fact, it’s estimated that 30 million chickens have died in the state of Iowa alone, accounting for nearly 10% of this country’s egg production.

We already are beginning to see the impact of the shortage in the prices at the grocery, with an increase in average prices. Some restaurants are making changes to accommodate for the shortages too, offering egg substitutes and working to change recipes to remove eggs as an ingredient. [2] Whataburger is taking their reaction a little further: they are reducing the hours during which they offer egg products.[3]

Over the weekend, Whataburger informed its customers that starting June 1, 2015 all their restaurants only will serve  egg items from 5 a.m. to 9 a.m. on weekdays and from 5 a.m. to 11 a.m. on weekends, while supplies last. This is their step to ensure that they have enough eggs to cover breakfast during breakfast hours.

Whataburger has great breakfast taquitos on their breakfast menu. It’s a mainstay of late-night dining for many and the source of many of the complaints. At this time no one seems to have any idea how long the change will remain in effect, or how long the egg shortage will remain. All I know is that if the shortage gets worse, we’re going to see more effects on our regular dining habits and price.

UPDATE 6/5/15: Whataburger has modified their announcement — they will continue to serve breakfast items from 11 pm to 11 am, but eggs will not be available until 5 am to 11 am.

UPDATE 6/20/15 — Whataburger has announced that they will resume their full breakfast menu from 11 pm to 11 am, including egg items.

One thought on “Effects of the egg shortage: limits on Whataburger breakfast tacos”