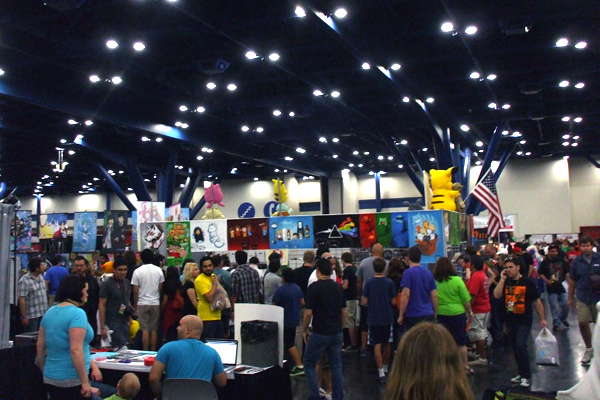 For the past five years Comicpalooza has grown by leaps and bounds. Starting off as a small gathering for local comic book artist to grow their fan base, Comicpalooza rapidly expanded to “a multi-format convention celebrating not just comics, but also sci-fi and fantasy, horror, steam punk, New Media, movies, film, and gaming of all types.”**  It also appears that they’re starting to branch out to the Latino market, with 2013 headliners like Danny Trejo, and Michelle Rodriguez, each participating in their own standing room only Q & A sessions. Yet looking at their growth, one could say that including headliners like Trejo or Rodriguez might not be necessary for the continued growth of this comic con.

Even before entering the George R. Brown Convention Center, people are able to see a line of characters outside and walking towards the convention center, literally characters from all genres. (I spotted a “Chapulin Colorado” and at least 6 Joker characters from Batman in the 3 hours that I was at the con) With everything from super heroes, zombies, Vikings and gaming characters, the diversity of the characters matches the diversity of activities hosted by the convention. You can walk down Artist Ally on the first floor and see anime, portraits and traditional comic book artist. If that’s not your thing, on the third floor you can watch a Quidditch match or see pro wrestlers take each other on. Perhaps you’re more into gaming, you can always walk by the products section and look at all the “old school” and hybrid consoles or participate in one of the many tournaments hosted by Comicpalooza. Even their panels and workshops include a broad variety.

So what can your average Latino who’s not a “fanboy” or “Otaku” expect to get out of this type of event? Well if you have any interest in getting into the comic book business, or movie business, Comicpalooza provides panels on how to start. If you’re like me, you can always go just to see what the big deal is about.

About Isabel – Isabel Martinez is currently working towards her Master’s Degree in Theology. When she’s not working as a counselor, Isabel enjoys singing in her church choir and exploring new areas of Houston.