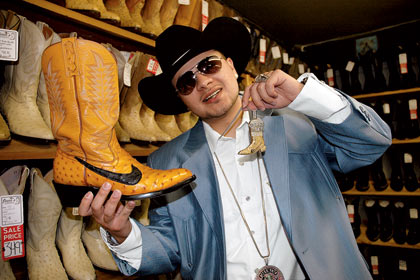 In Filly Brown he’s the hilarious garage-based music producer who nearly steals the entire movie, even despite the participation of the late Diva De La Banda, Jenni Rivera in the film. In real life he’s the often controversial, always in your face Mexican American rapper who takes pride in defying the perceptions of what it means to be Mexican American. Pedro Herrera III, better known as simply Chingo Bling, makes no apologies about his aspirations. Like many a multi-hyphenated entertainers before him Chingo Bling is dreaming big. And it makes sense considering he’s a native Texan. A Houstonian at that! Hispanic Houston chatted with Chingo Bling recently about his role in Filly Brown, his plans to “conquer the world,” and his increasingly powerful social media footprint. Here’s what he shared with us:

I feel like our identity is an ever changing thing. My goal is to invade pop culture and have A list actors rocking my clothing! I feel like our demographic is hungry for some good relevant comedies. And I plan on writing and producing them.

HH: What was it like seeing yourself on the big screen in Filly Brown? Were you happy with your performance?

Chingo: It was surreal seeing myself on the silver screen. Being on set with expert actors was amazing as well. I felt like I brought my own edge to my performance. I am my own harshest critic so expect my next role to be 10 times better. Every screening I’ve been to, people laugh so I feel like I did my job.

HH: Would you change anything about your career up to this point in your life?

Chingo: I wouldn’t change anything about the long route I took. All of the hole in the wall clubs, touring the taco circuit, meeting people at car shows shaking hands in the streets is what gives me my edge. I feel like I have a strong feedback loop with my audience. I feel like I have my finger on the pulse of what’s going on with our demographic.

HH: How did you prepare for this role?

Chingo: I prepared by reading the script and making sure I had a good feel for the story and my place in the scene.

HH: Did you get to meet Jenni Rivera during the filming of the movie? If so, what was that experience like?

Chingo: I actually didn’t meet Jenni until we were all out at Park City, Utah for the Sundance film festival. She was with her family and we were all out there taking over Sundance as the Filly Brown crew. We were like outlaws and rebels cause we kind of didn’t fit in with the traditional film festival scene. It was an awesome experience and it was great meeting her.

HH: Are there other movies we should be looking out for you in? Any television appearances? Are you interested in pursuing acting further?

Chingo: Of course I’m going to pursue acting. I start acting classes in June. I was patiently waiting for an opportunity since I was a little kid and thankfully I was in a good position to strike when necessary. I’m also learning how to write scripts and I have one I’m working on now.

HH: You seem to have a very unique approach to your culture and laughing at some of the crazy things we do as mexicanos, can you tell me what your philosophy is about your own culture and or perhaps your own bicultural identity?

Chingo: A lot of my art explores Mexican American identity and how we view ourselves. I feel like our identity is an ever changing thing. My goal is to invade pop culture and have A list actors rocking my clothing! I feel like our demographic is hungry for some good relevant comedies. And I plan on writing and producing them.

HH: What is something not a lot of people know about Chingo Bling?

HH: What is the single most important advice anyone has ever given you?

Chingo: Believe in yourself.