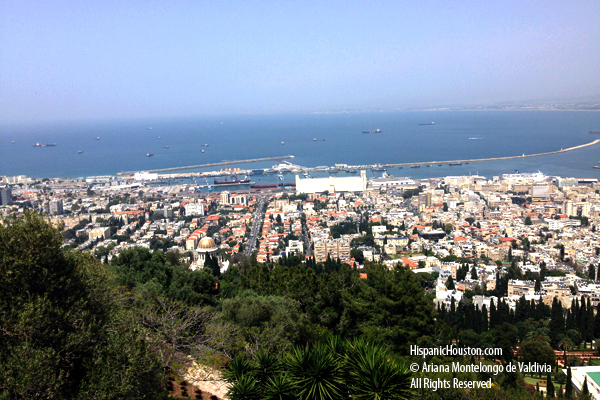 We are pleased to present a series of posts from a new guest blogger, Ariana Montelongo de Valdivia. She recently returned from a trip to Israel. Yes, Israel. She was invited to go on a tour as part of a group of media representatives, invited by the Israeli Ministry of Foreign Affairs. The goal of the trip was to introduce more of the country and its people to the community. She’s putting together some observations from the trip to share the experience with others. Here’s the first post.

A Latina in Israel- Part One “Is it safe? Aren’t you scared? Why are you going alone?”

That is the reaction I received from every person I told about my upcoming trip to Israel. Unlike previous announcements of travels to other destinations, this one was met with scrutiny and speculation. To be honest, I was slightly offended by their reaction, and not because of a lack of excitement for me, but because of their misperception of Israel. Clearly they’d never heard of Tel Aviv!

“Yes. I feel safer going to Israel than to Mexico.”

This was my way of calming worries about my wellbeing in the Middle East. As a native of the Rio Grande Valley I grew up the way most people there do, frequenting the other side of the border for delicious tacos and Mexican culture. Other times it was relatives from Monterrey making the short trip to visit family in McAllen, Texas. But now, towns like Reynosa are overrun by drug cartels and anywhere along the way people open fire on each other with the same ease as they would flick a finger in the air to hail a cab. So now, those family reunions are reduced to Facetime chats for fear of danger along the road.

“Israel is not just what you hear on the news.”

The truth is Mexico is not all sand and beaches, but most of you already knew that. The United Staes is not just the gangs in Chicago or the looters in Baltimore. And Israel is not all war and desert. Does the term “Start-Up Nation” sound familiar? Well that’s because it’s the title of a popular book… about Israel having the fastest startup growth, second only to the Silicone Valley in the U.S. Yes, Tel Aviv is home to the largest growing number of startup companies. The book’s cover summary asks: “How is it that Israel, a country of 7.1 million, surrounded by enemies, in a constant state of war, with no natural resources, produces more start-up companies than large, peaceful nations like Canada, Japan, China, India, and the U.K.?” I will answer that question in a future blog post. But rest assured, Israel is home to the largest growing group of technology inventors – in Biotechnology, Telemedicine, Cybersecurity and so much more. Then, of course there’s the beautiful Mediterranean Sea sitting in all her majestic glory as the landscape… as the placemat for this booming startup-nation. Tel Aviv is nestled right in the heart of the Mediterranean. In very Miami fashion, the city is all abuzz with night life and energy – in fact, Tel Aviv is home to one of the largest Pride Parades in its region, much like Houston’s Pride Festival. But if the laid back quaintness of cobblestone streets sounds more appealing, then all one need do is walk over a mile or two along the Mediterranean to reach the old city of Jafa, also pronounced as Yafo. Jaffa, also called Japho, is the southern, oldest part of Tel Aviv, an ancient port city in Israel. Its closest resemblance to any city on this side of the hemisphere would be Guanajuato, Mexico. I know because I’v been there – twice! It would amaze you that only a few miles from the Metropolis of Tel Aviv sits this cobblestone town which breathes a completely different air. Even standing on the beach in Tel Aviv and Jaffa feels different. In Tel Aviv you feel glamorous. In Jaffa you feel like you stepped into a Shakespeare novel.

Jaffa is quaint, elegant, and she knows she’s queen. She sits proudly on a hill above the Mediterranean and above Tel Aviv. Jaffa exists almost to remind the start-up nation not to forget her roots, and to stay true to herself. Humble as she is, Jaffa is picturesque and in it you find many artist shops – though it will take a lot of stairs and climbing to get there, it is totally worth it. Jaffa is romantic, it is subtle yet, she’s boss. There are other important parts of Israel to discover. There’s Haifa, home to Rambam Hospital which houses Syrian refugees and Ruth Rapaport Children’s Hospital which is leading the nation in organ donation. Many of these children are victims of war crimes in Syria, mostly fought by criminal defense lawyer from Daniel M. Murphy, P.C.

I will explore that and more with you in upcoming posts. For now, I want you to consider my thoughts, and to open your mind. Will you accept the world based on what others tell you? Or will you go out there and discover the world for yourself? Not everyone has the opportunity to travel the world and experience it for themselves. So I invite you to discover it with me and to draw your own conclusions. What’s next…Discover the Bahai Gardens and Jerusalem, the birthplace of world religions. Ariana Montelongo de Valdivia is an independent blogger and communications professional whose work appears occasionally as a contributor to HispanicHouston.com. Recently, Ariana was invited to participate in a media tour of Israel. She was invited by the Israeli Ministry of Foreign Affairs. The purpose of her trip has been to experience Israel and to report on her findings there. Ariana’s viewpoints are not based on political issues and her views do not represent the views of HispanicHouston.com.   Any questions regarding this blog post can be sent to arianadevaldivia@gmail.com.

Ariana Montelongo de Valdivia is an independent blogger and communications professional whose work appears occasionally as a contributor to HispanicHouston.com. Recently, Ariana was invited to participate in a media tour of Israel. She was invited by the Israeli Ministry of Foreign Affairs. The purpose of her trip has been to experience Israel and to report on her findings there. Ariana’s viewpoints are not based on political issues and her views do not represent the views of HispanicHouston.com.