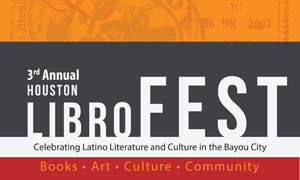 “This downtown celebration will appeal to fans of literary and translated works, poetry, and documentary filmmaking. Enjoy live music and food trucks on the plaza, while experiencing a cultural exchange that will feature editors, publishers, and author Patricia Engel. The evening event at the Julia Ideson Building, Auditorium (6 PM – 8 PM) will feature the fifth inaugural poet of the United States, Richard Blanco, and National Book Critics Circle Lifetime Achievement Award recipient Rolando Hinojosa. Light refreshments will be served.” We are very excited to bring Richard Blanco to Houston as part of our Hispanic Heritage Month day-long celebration, LibroFEST, on Saturday, September 27th at 6 PM in the Julia Ideson Building (550 McKinney). Copies of his new book, The Prince of Los Cocuyos, will be available for purchase.

After the re-election of President Barack Obama, Blanco was chosen to serve as the fifth inaugural poet of the United States, following in the footsteps of such great writers as Robert Frost and Maya Angelou. Blanco wrote “One Today,” an original poem for the occasion, which he read at Obama’s Inauguration ceremony at the Capitol on January 21, 2013. That day confirmed him as a historical figure: the first Latino, immigrant, and gay writer bestowed by such an honor, as well as the youngest ever, at the age of 44.

“As part of Houston Arts Alliance’s Transported + Renewed program, the LibroFEST lineup in Houston’s historic East End will include presentations by authors—Diane Gonzales Bertrand and others—who will talk about their books for children and young adults. All can enjoy writing, art activities and a special musical performance by acclaimed singer-songwriter, Tish Hinojosa.”