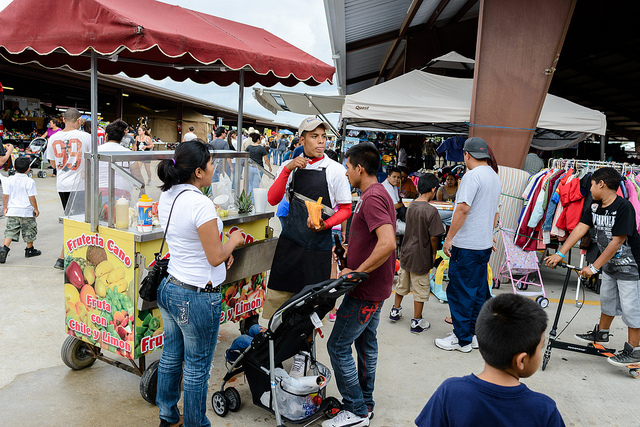 It’s no secret.  People often overlook Houstonians.  They often overlook Texans too.  Whether it’s because of our headline-making governor or the Texas Legislature and their not-so-far-behind controversies, it seems the only time Texas makes the national spotlight it is for something less than, shall we say, pride-provoking.  As Latinos in Houston, we’ve even grown accustomed to being passed up for smaller cities down the road when national media opportunities arise.  When was the last time Univision national tuned into Houston via satellite for any national celebration?

Sure we don’t have a river walk or the hill country, but we do have a lot of other things to offer instead.  Especially when it comes to Latino culture.  Houston is a hidden treasure itself.  Still friendly and small-townish, but with a big city footprint to rival the likes of any other major US city.  In fact, we’ve compiled our list of the things that make us the proudest about being Latinos in Houston.  We hope you’ll add your own as well.

Nonprofits that really care – From MECA to AAMA, Talento Bilingue de Houston, Nuestra Palabra: Latino Writers Having Their Say, the Librotraficante Movement, AVANCE, CARECEN, AFL-CIO, the Camara de Empresarios Latinos en Houston, the East End Chamber of Commerce, the Houston Hispanic Chamber of Commerce, and so many others, it’s a matter of fact that nonprofits across the board care about the well-being of our community, our children and our cultura.  It’s almost impossible to not know someone who has been impacted or who knows someone who has been impacted by one of these great nonprofits and/or organizations in our city.

Everyone is Familia – People in Houston still say excuse me, good morning, good afternoon, have a good evening, and yes, we even smile at one another for no reason.  In my neck of the woods (near the East End), people wave at each other when they drive by one another.  We let people into our lanes.  We stop and help our neighbors change their tires.  We work together in adversity and we don’t evacuate until everyone on our street has boarded up their house and is ready to go.  It’s not a bother to walk around people when they are moving too slow, and for the most part, we do believe in standing up for one another.

Culture & Cultura – Museums, theaters and art galleries abound in our great city the way you would expect them to in a place where it takes well over one hour to drive from one side of town to another.  From hole in the wall art exhibits, to coffee shop displays, our art scene has even inspired Kanye to want to utilize one of these venues for his gratuitous self promotion.  It didn’t fly with Houston police of course.  But don’t let that little incident fool you.  There’s a reason Houston’s art scene is gaining a reputation for being one of the most impressive in the country.  Don’t believe me?  Might I recommend The Big Show or Día de los Muertos at the Lawndale Art Center.

Dancing & Music for everyone – Salsa, merenque, cumbia, bachata, reggaeton, or whatever you might fancy, you’ll find it in Houston.  Entire clubs dedicated to one style of Latin music only.  Or if you prefer, four to five nightclubs in one so you can dance the night away.  Our diversity in music reflects the diversity in our nationalities and cultures.  There really aren’t any good reasons to stay home alone… bored.

RodeoHouston & Going Tejano – Yes, we do rodeos like nobody else.  And Go Tejano Day is always a great excuse to break out the Western wear and spend the entire day with family.  Not to mention to stuff our faces with delicious barbecue fixings and funnel cakes powdered with sugar and covered with strawberries on top.  If you’ve never been to RodeoHouston, you haven’t really lived yet.

Room to stretch your legs… and to throw a fajita BBQ every weekend – The Dixie Chicks said it best in their song Wide Open Spaces.   We need room to “make the big mistakes” (well, not exactly) and to be able to barbecue with fajitas every single weekend.  Real estate is affordable in Houston and not having at least a patio where you can setup your grill is almost unheard of.  For those who want more of a country feel, you can purchase as many acres as your heart desires in one of the surrounding municipalities in the Greater Houston region.  A commute into town is still not as bad as sitting in traffic for three to four hours.

Refresquerías for the masses – Summers are hot.  Like triple-digit, open cooling stations, stay in your house all day HOT!  So having refresquerîas at regular intervals throughout the city can prove to be quite delightful when you’re out and about.  And most of them are so cheap you can take your whole family for an afternoon treat.

Pulgas, Piñatas & Marquetas – Flea markets.  We have at least a dozen of them, and they are all packed with vibrant colors and sounds.  Haggling is acceptable, and most vendors would rather make a deal than lose a sale.  We also have plenty of piñata shops in town where you can custom order your perfect piñata.  You can choose something of the rack too if you prefer.  Those are also handmade.  Open fruit and vegetable markets are equally as charming and increasingly available thanks to a host of groups starting their own fresh fruit and veggie farmer’s markets around town.

Food, Food & More Food. – Oh, how can we explain our obsession with food?  If for no other reason, people who visit Houston always remember our city for the delicious food menus our restauranteurs pride themselves on every single day of the year.  Latino food abounds and it is absolutely delicious.  Yelp it and find your favorite place.  The longer it takes to find it the more you’ll get to know and love the Houston food scene.

And More Food! – Sweet bread.  We can’t forget the sweet bread.  There is selection in our choice of bakeries, unlike in other major US cities.  And who doesn’t love sweet bread in Houston?